HomeCoaches ArticlesWHY SHOULD YOU CONSIDER INTEGRATING ROWING INTO YOUR TRAINING? 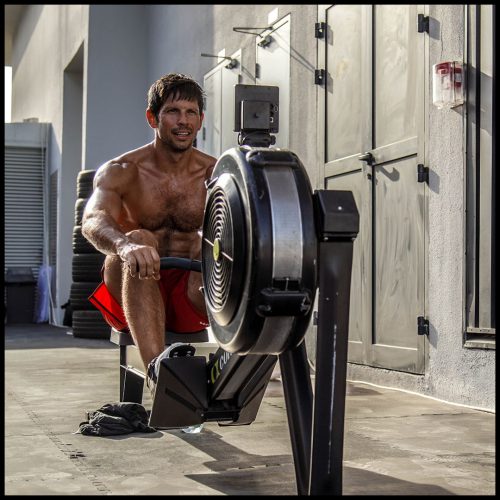 Rowing has been a big part of my training programme for nearly 15 years now. And it all began when I began to work with the South African rowing team whilst they were preparing for the 2008 Olympics. (pretty cool right?!) Long story short, one of the guys on the team challenged me to a 2000m race and I ended up rowing it in 6:57 which I was told was actually not half bad for a first attempt.

I still remember getting off the rower and feeling that total body pump; my legs where gone and I was walking like Bambi (if he had played rugby). Needless to say, I was hooked and since then its been a huge part of my programming for a number of reasons which I will outline in more detail shortly. But the major reason it’s remained an integral part of my training plan is because I have learned to enjoy it. Whether it’s rowing for short distances or longer ones, I have found ways to always keep things interesting and “fun.” And that certainly makes things so much easier when the going gets tough.

So where does rowing fit into your training?

WHAT TO CONSIDER BEFORE ROWING

I believe that rowing is one of the most effective ways to improve overall conditioning, but also one of the most underrated training modalities. It is not like getting on the assault bike and just smashing out calories for time. There is an art to rowing that requires a lot more rhythm and grace than you might expect. I would strongly suggest to anyone looking to add rowing into their programming to focus on the technical aspects to avoid picking up bad habits. Just like with the barbell, you wouldn’t jump into heavy snatches until you’ve nailed the technique first. Quality over quantity will be your most important starting point. And don’t forget your most useful phrase when you first begin; “legs, arms, arms, legs.”

As said there is an art to rowing and rowing well. To start with it can seem complicated and you can very easily get confused watching the various rowing techniques in your local gym. Anyone can smash out 500m sprint on the rower and get away with poor technique, but as you spend more time on the rower for longer distances that poor technique won’t do you any favours. So simply start with the basics first and if you’re still are feeling overwhelmed, simply reach out to me for some advice and pointers.

HOW ATHLETES FROM ALL BACKGROUNDS CAN BENEFIT FROM ROWING.

If you are someone who trains hard in some way on a weekly basis, then you could definitely benefit from doing some slower, more controlled pieces on the rowing machine. Learning to work at a steady state and develop you aerobic base will in turn increase your aerobic capacity.

For training like this I would recommend using a heart rate monitor to help you keep the intensity low. Use the Maffetone Method by subtracting 180 from your age and then work at that intensity level. Change the monitor on the rower to show watts (I know that this will be pretty much alien to everyone unless you are a cyclist), the reason for the change to watts is so that you don’t get distracted or fall back into the trap of targeting splits. The addition of this type of training to your schedule is to prevent you burning out but still allowing you to get in some training.

Further, with an increase in aerobic work, you’ll begin to better utilise fat as a fuel source. And while a lot of us train for performance reasons, many of us also do so to maintain a certain aesthetic factor and feel and look our best. And there’s a reason that the aerobic system is the biggest in the body; fat as an energy source can keep us going for longer so why not train your body to tap into this? As a result, you will find that you become more efficient in utilising your different energy systems, which will make you more resilient to the type and amount of training you put your body through.

Unless you plan on becoming a full-time rower, all you need to do is begin in a way that can be supplement your current programme and goals. The benefits of rowing are extensive, but the same can be said for most other forms of training, the key is to get the right balance with your volume and intensity of training that you do on a weekly basis. Keep focusing on your weaknesses and be prepared to put in time doing things like building your aerobic capacity or developing your power and strength.

If you are interested in discussing how you can incorporate a rowing programming catered to your goals- whether it be in the realms of CrossFit, running, cycling or just general training, then all you have to do is ask and we can get you set up with a consult and, of course, a rower!