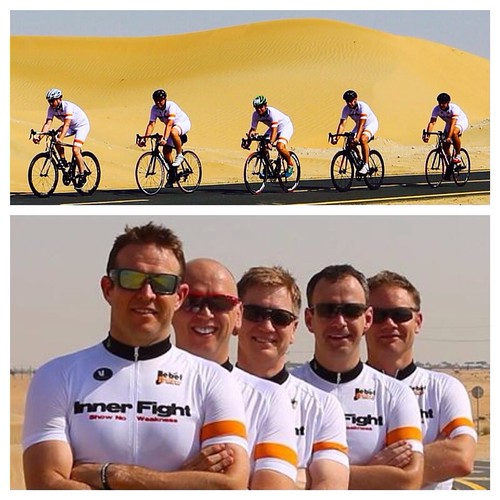 The 'Jebel Raiders' were formed back in July 2011 when Phil Gould had the bright idea to cycle the length of the Pyrenees, from the Atlantic Coast to the Mediterranean cost in 100 hours,  a distance of 720km passing over some of the most famous mountain cycling routes in France. ‘Jebel’ being the Arabic word for mountain or hill, and ‘Raid' being the name of the route he was planning to take - the Raid Pyrenees. Four colleagues were inspired to join him and 12 months of hard training began, the first task for most of them was to buy a bike! In September 2012, Phil together with Jon Emery, Derek Heffernan, Lenny Charlton and Tim Hooker completed what had seemed an insurmountable challenge and for most of them, it was a life changing event. This year, the Jebel Raiders, minus Jon but joined by Steve Dixon and Mark Paver, are taking on another challenge, this time The Alps. They will cycle from Lake Geneva to Antibes on the Mediterranean cost, a total distance of 835km with 19,500m of ascent. They are planning to complete the route in 7 days, starting on Friday 30th May. It is significantly more challenging than the Raid Pyrenees but the team are fitter, stronger, and in Phil’s case much lighter, than before! Training with InnerFight has played a big part in the increased physical and mental fitness for some of the guys. As part of the challenge, the Jebel Raiders have decided to raise money to help educate kids living in the Mathare slums in Niarobi in Kenya. Tim Hooker and his family became acquainted with the Baba Ndogo School back in 2011 when they planned a safari holiday to the Masaari Mara. Tim’s wife Fiona, wanted to add perspective to the trip by spending a day helping others and was put in touch with Missions of Hope International who run a number of aide programmes in the Mathare Slums. Not wanting to arrive empty handed, Fiona and their son Quinlan collected 100 pairs of used crocs shoes to give to the kids from friends and through an appeal at Quin’s school. “…they never wear out, they are easily washable and they are extremely light to carry” thought Fiona. The school was tiny with 200 kids crammed into not much more than a corrugated tin shack. The joy this simple gesture created for the kids was overwhelming but it was heartbreaking when they ran out of shoes …. still with a long line of expectant children. The only solution was to promise to go back with more shoes! When they were back in Dubai, Fiona sent some photos she had taken to crocs UAE and they were so moved by the images she had captured, they donated 800 paris of new crocs to take back to Nairobi. Fiona and Quin returned in April 2012 when a new school had been built, this time housing 700 kids. These visits to the Mathare Slums became the subject of a photography exhibition Fiona staged at Gallery 76 at the Dubai International Arts Centre in January 2013 in order to raise awareness of life in the slums. Two of the Jebel Raiders team saw the exhibition which inspired the choice of this cause for the Alps trip. It cost $35 a month to send a child to the Baba Ndogo School and the aim is to raise enough money to fund three or even four kids through their Elementary Education. You can follow the progress of the Jebel Raiders as they cycle across the Alps on their facebook page and you can contribute to the cause by visiting their fundraising campaign Jebel Raiders Alps Challenge