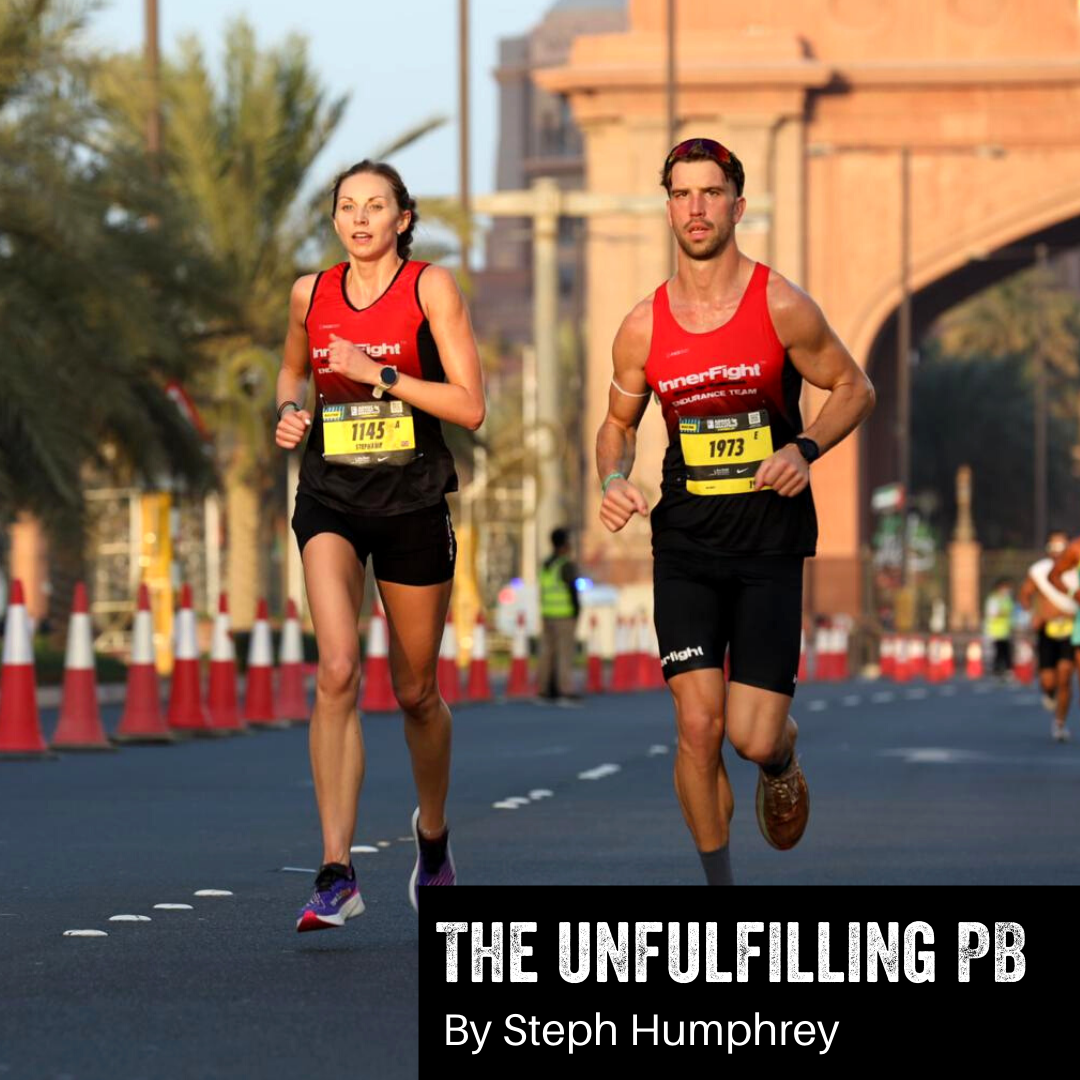 Since joining InnerFight Endurance I have often wondered how I would perform in another marathon. I ran London in 2015 whilst working full-time in a “proper job” (office job). I was in my 20s, my running knowledge was somewhat lacking, and nights out were frequent. Nevertheless, I stuck to a training plan and bashed out a 3:26:54. It was a big tick.

15 months of the "InnerFight Effect" later, I found myself signing up for the November 2021 Abu Dhabi Marathon, alongside approximately 40 InnerFight clients and coaches. I was excited for the journey to come.

Race season in the UAE commenced in September, and I stuck to my 2021 Commitment, “Focus on key events/races and build towards them specifically (as opposed to racing everything week in week out)”. The temptation was high to jump into other races pre Abu Dhabi, watching clients and colleagues toe the line, I wanted a piece of the action. But I stuck to my plan, it was all eggs in one basket, the Marathon.

I will never say that I sacrificed things for this marathon, because I think that any adaptations I made, genuinely made me better; and I can look back at such a solid block of training. I was using food to either fuel or recover, sleep was a top priority, I had checkups at DISC to help with alignment, and I religiously ticked off my rehab and mobility.  I only missed a couple of sessions due to sickness, never for laziness or lack of motivation. Did I want to keep showing up every time? Not really. There were hard days, there were days when I was spat out of a track session, but I learnt and moved on. My weeks became incredibly structured, every day had a purpose, and everything pointed towards being marathon ready. It was my priority. I was often the first and last person on the track at our Tuesday sessions, sometimes roping other coaches or clients into my sessions.

Commencing this training block in summer I had a somewhat unknown race time goal at the beginning. However, there were 3x numbers in my head (my A, B, and C goals). With summer not really letting up, I began to lose hope on the A goal about 6 weeks out. But as the temperature adjusted things started to come right. I was hitting numbers I had never seen before in track sessions; I was cruising through 30km+ weekend long runs. It was all coming together.

As we entered the taper phase, I saw myself with 2 options, the A goal (2:59:59) or B goal (3:09:59). The A goal scared me, but I knew that if I ran at 4:30 km pace for the 3:09 I would be gutted to finish with something left in the tank, wondering “what if”. When Tom offered me his pacing services, I was blown away, and thought I would be a fool to refuse the offer.  I spoke to my coach, other coaches at InnerFight, Jack, and my Dad about the A Goal. They all believed in me, no one thought it was a mental idea and out of reach. I decided to risk it, go all in and aim to hold an average pace of 4:15 per km to get that 2:59:59. I was scared but excited.

On the morning of the marathon, I was weirdly not too nervous. I felt pretty calm and collected. I went through my normal morning routine, stayed present in everything I was doing, there was a job to be done. I wasn’t even that phased when I “lost Tom” right before the race. I told Jack to keep an eye out for when he arrived at the start, and to let him know if I had gone. I figured he would catch up no probs! Nevertheless, him and Rob jumped into the starting pen with about 2 minutes to go, we took a photo and we waited for the gun.

We cruised; the effort felt easy. I had planned for this, to not get sucked into others around me shooting off, they would come back to me. At 5km we were bang on track, it was fun, it felt good. Rob was back with us after his almost immediate toilet break, and he was bantering along at the back of the bus. Along the Corniche towards 12km we ran in a line, Tom, me, Rob. It was great. Tom would grab us water and Rob would heckle at every single person he knew. It felt like a Coffee Run. They were fully conversational, I noticed that I wasn’t. At the time I put this down to nerves or negative thoughts. I let this thought pass over me and I just stuck behind Tom as we turned the corner into the Marina passing the InnerFight support crew.

15km in, it was like a switch. I did not feel good. I was hot, but cold, my breathing was erratic, and my pace dropped. I started to panic. There was no room for error on pace for the A goal, especially this early on. I had a stabbing stitch through my ribs, and I felt too full. I was concerned. Surely this was meant to happen at about 30km, not before half way. Rob held pace, and we gradually watched him roll into the distance. As we came out of the Marina at 21km and ran back past the InnerFight support crew, I heard them shouting words of encouragement, and all I could think was “why are telling me I’m doing a good job? We have missed the target. I feel like hell, and I am only half way. Can’t they see that I am suffering?!”

Despite Tom telling me that he would not talk to me and just run at 4:15s, he knew I was in trouble. He put on his coaching hat and tried to reshape my self-talk. In all honestly, I wasn’t having negative self-talk, I just wasn’t having any self-talk. I wasn’t present. I was in so much pain, and I couldn’t shake the sinking feeling of my goal plummeting through the floor. Tom reminded me of my training, gave me form cues, and told me to forget the watch.

I had moments where I would get my stride back and I would feel like I was running properly again, then I would suddenly have a feeling that I had been hit by a truck. I wasn’t able to focus, or think, I felt disoriented and confused. I felt sorry for Tom, I was wasting his time. He was here to pace me to the A Goal, not pick me up from a 15km in.

As agreed, Tom got me to 30km, he peeled off and told me I was strong (in his more aggressive race mode tone). I wanted more than anything for this run to finish. But it never entered my head to stop at 30km with Tom. The end was 42.2km, and the only way to get there was to move. It literally became left foot, right foot in my head. I wasn’t clock watching or chasing, I was surviving. The sun was strong, but I was oblivious. The roads were quiet, I was probably swaying. I scanned the empty road hoping to stumble across a neglected water bottle because I was so incredibly thirsty. I felt like crying, but knew that wouldn’t help me get home any quicker. My heart felt broken.

Somehow the KMs ticked off and I got to 37km, I thought “sweet, a 5km ParkRun to go, I can do a ParkRun!”. (I do really wish I had remembered that I had 1 last gel in my pocket though!)  As I got closer to the finish there were people who would call out my name and offer encouragement. Some were strangers to me, some were known. Having looked at the race photos, I can confirm that I had that glazed over look in my eyes. No one was home. I heard voices, but saw no one.

I did not have the brain power to calculate what time I might finish in; I just gave it what I could. I crossed the finish line in 3:19:00. A Personal Best. Yet I felt an overwhelming sense of disappointment.

I turned to my left, and saw Carla walking towards me with her beaming smile and kind words. Over her shoulder I saw Jack sprinting through the race village to find me. His pride in me is relentless. In that moment I felt like I had failed. But looking back, I am not sure what I think I failed. I hit the C Goal, and I didn’t quit.

I gave myself about 5 minutes to recompose, take my shoes off and calm down. There was no point sulking. Besides, my hair was hilariously tangled. Carla had just had the race of her life, and whipped out an epic PB, coming 2nd in her Age Group. And I had a bunch of clients who were due to come through the finish line. I took myself to the finishing funnel and shouted at those with 200m to go for about 2 hours, until everyone from InnerFight was through.

About 12 hours later, Jack reminded me that I had still run a BQ (Boston Qualifying time), I hadn’t even noticed! We popped open the bubbles. Bittersweet.

In the last 24 hours I have been overwhelmed with support from near and far. Some who are in awe of the time, some who want to help me piece together the why’s and the next steps. Running is not a solo sport.

A 3:19:00 on a bad day is flattering, but not what I thought I deserved. In reality, we deserve nothing. In the blink of an eye your entire life can be turned upside down. When I am ready, we will go again. Can’t wait to see what I can do on a good day.