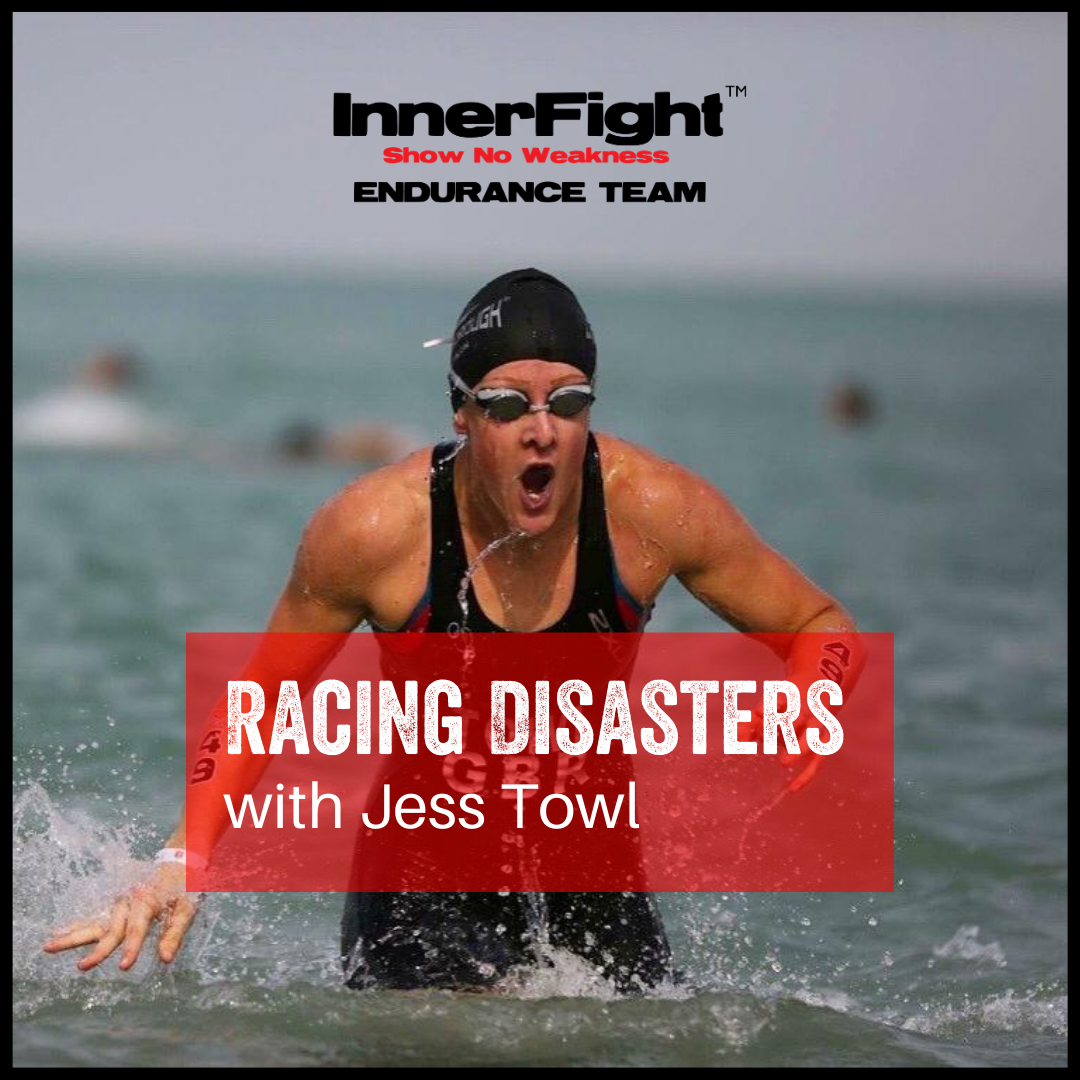 So as races have started again, I thought I would give you some tips for racing and funny stories from my own experiences. Yes we all mess up and learn lessons the hard way, even the pros!

It was my A race of the season and I was in the shape of my life looking forward to competing against a field of world-class athletes. One of my friends offered to let me borrow his race wheels, he met me the morning of the race so I didn’t test them out before hand and in the stress of race morning I didn’t even fully check them. I put them on my bike and headed into transition. I was out of the water and into the lead pack, 3 of us had a 1-minute lead on the second pack, which had Olympic medallists in it. I felt good and strong and suddenly as I took my turn on the front I heard a bang and immediately felt like my breaks were on. I had a blow out.
As pros racing an Olympic distance race there is no time to change a tyre or replace the wheel. Once you lose that pack your race is over and the walk of shame back to transition begins.

Seems simple enough right? Well even when I had my name board on my transition rack I still managed to mess this one up.
Flying into T2 in a pack and wanting to be the first one out onto the run all I saw were my shoes and my white towel. Bike racked, helmet off, shoes on in a second and off I go. Something didn’t feel right and about 1km into the run I realise that the shoes I was wearing were not mine, they were a few sizes too big!
People are going to have similar shoes and towels so just make sure you know where your transition rack is, put crazy coloured elastic laces in your shoes, use a bright towel, anything to help you find your rack easily.

I have had my fair share of violent starts; pontoon starts always seem the worst as you literally dive on top of each other when the gun goes.
One race I did in France we had 60 female athletes starting on a pontoon with 20 lanes, it was carnage.
Whether it was on purpose or by accident ill never know but someone ripped my goggles from my head and completely unzipped my wetsuit. It immediately filled with water and my arms became so heavy I could barely lift them. My goggles were gone at this point but I had to stop and try to zip myself back up so that I could carry on. From that day I always kept my goggles under my hat and tucked my wetsuit cord deep into it. That way no one could grab either of them and even better I could find my wetsuit zipper easier as I was running from the water to transition.

Make sure you are familiar with the course. Study the map and go for a small recce ride the day before to familiarise yourself with where you will be going.

One year in the London Triathlon I was following what I thought was the lead vehicle, but it was actually just a cameraman on a motorbike. I noticed that the usual barriers that line the streets had gone and before I fully realised we were off course we hit a dead end! There was a group of about 6 of us that came to a full stop. We had to turn around and head back until we found other cyclists that were on the right route.
It is easy to blame race officials, to just follow other athletes, to blame bad signage, no barriers, no lead vehicle etc but at the end of the day you are responsible for knowing and executing the correct route. Do not rely on others and just blindly follow other athletes.

It doesn’t matter if you aren’t hungry or thirsty, you must eat and hydrate well for a triathlon regardless of the distance.  One summer in an Olympic distance race I had taped a gel to the cross bar of my bike. In the rush of draft legal races I accidently dropped it before I could eat it. I didn’t have a back up and I only had water in my bottles. Moral of the story: always be over prepared! It’s better to finish a race with an extra gel than to be suffering without one.
In the same race I didn’t drink on the run because I was desperately trying to hold onto a podium position. I thought if I grabbed water I might lose my rhythm or lose a few seconds and I just didn’t want to risk it. 1km left to go and I didn’t even know my own name, I was suffering from heat stroke and running in zigzags. The next thing I remember was waking up in fully naked in a bath of ice and an IV in my arm. Funny part to this story is the first thing I said when I woke up was “please tell me you didn’t cut off my Tri suit”
It was my GB Tri suit, my pride and joy the thing I had worked so hard to get. You had to earn those by racing at either European or World level. Since that day I have made sure to never have a nutritional or hydration issue racing again.

In my opinion you cant practise this enough.  I recently stood at the dismount line at a local triathlon in Dubai and it was very entertaining albeit quite dangerous.
I saw people brining their leg over the cross bar rather than behind. People completely stopping and others fly into the back of them and some athletes with their feet still inside shoes toppling over.
We used to do series of super super sprint races that were extremely fast. Imagine 20 riders coming to that narrow dismount line at very high speeds all wanting to be the first out onto the run. Believe it or not it’s not as bad as you imagine. Pros practise and practise this until it becomes second nature. They are so smooth and fast and safe around others. Of all the triathlons I have ever done I only ever had one issue here, my bike somehow got interlocked with another triathletes and we couldn’t separate them, we were both pulling our bikes and getting nowhere in the end we racked them still stuck together and were just very lucky we didn’t get penalised.


As a former professional triathlete I have seen and done (nearly) every mistake. Thankfully this gives me an extra edge as a coach! So please reach out if you have any questions or want to discuss coaching options.