HomeCoaches ArticlesEndurancePractical application of HRV
We talk about Heart Rate Variability a lot. We have a guide to it here, a podcast with the owner of HRV4Training and I also recently became a HRV4Training mentor. But how about some real practical data on HRV and how we use it with athletes. Situation. An amateur triathlete during a one month build into a race after two weeks post race. Athlete feels tired and like they are not recovering as well as they should. HRV4Training daily data shows no immediate warning signs. 30 day recovery point average - 9.2 30 day resting heart rate average - 46 bpm 30 day rMSSD average - 131.1 Athlete continues to push on with both work and training. The next three pictures show an interesting trend. 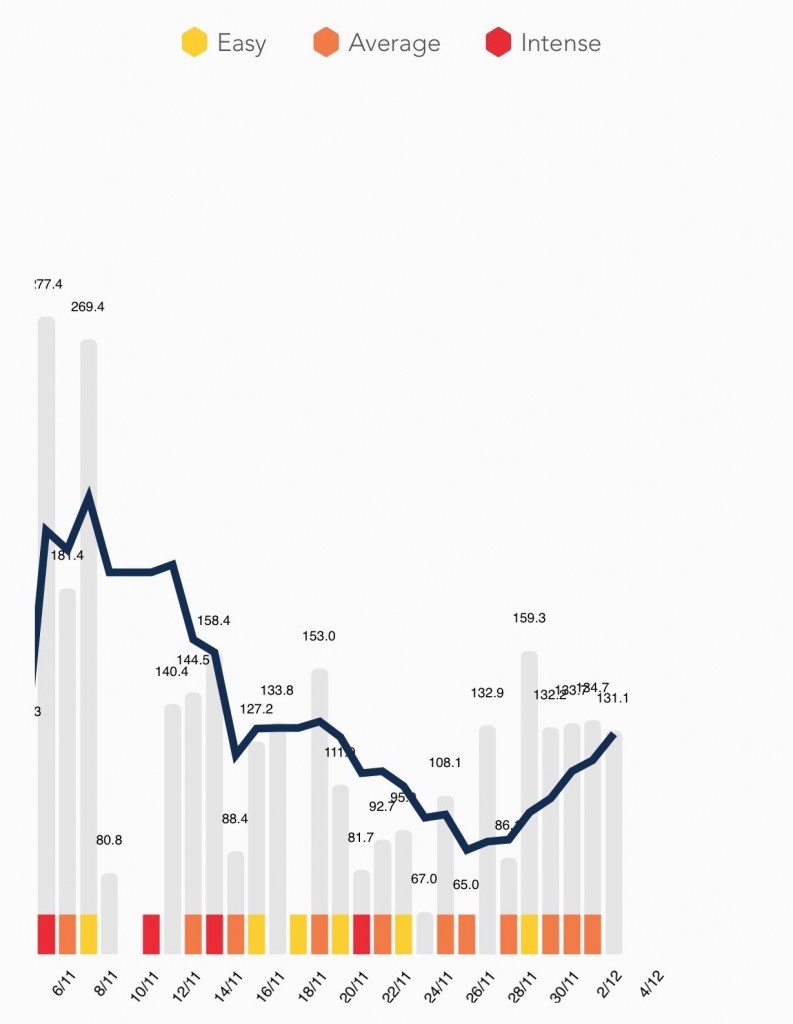 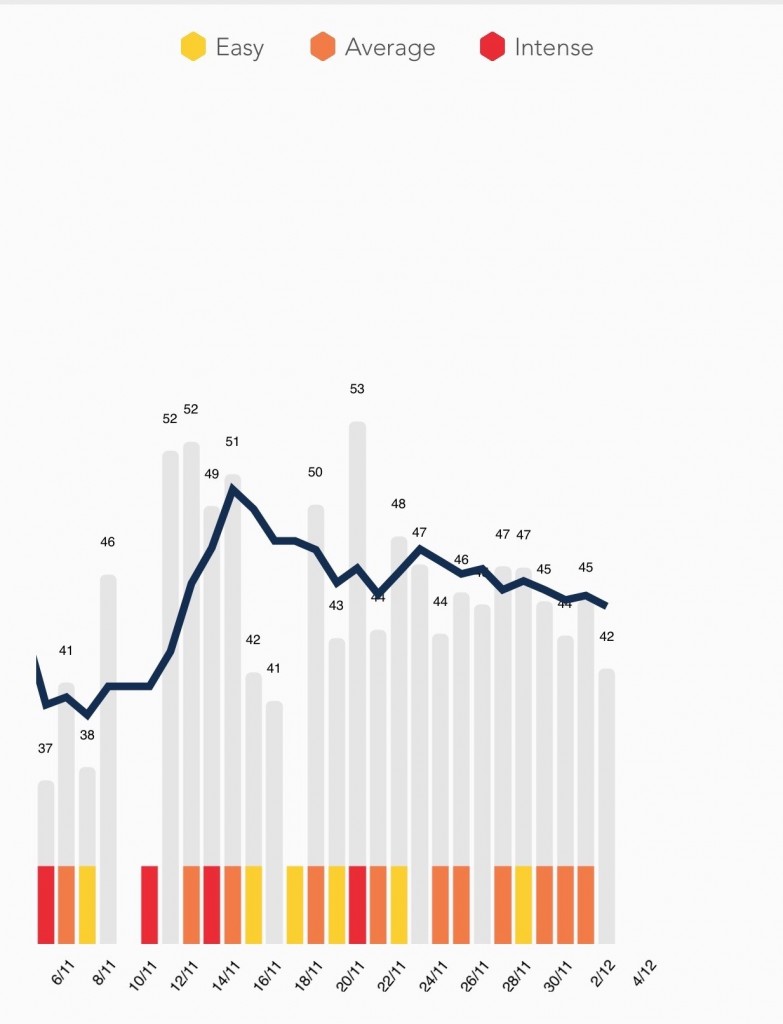 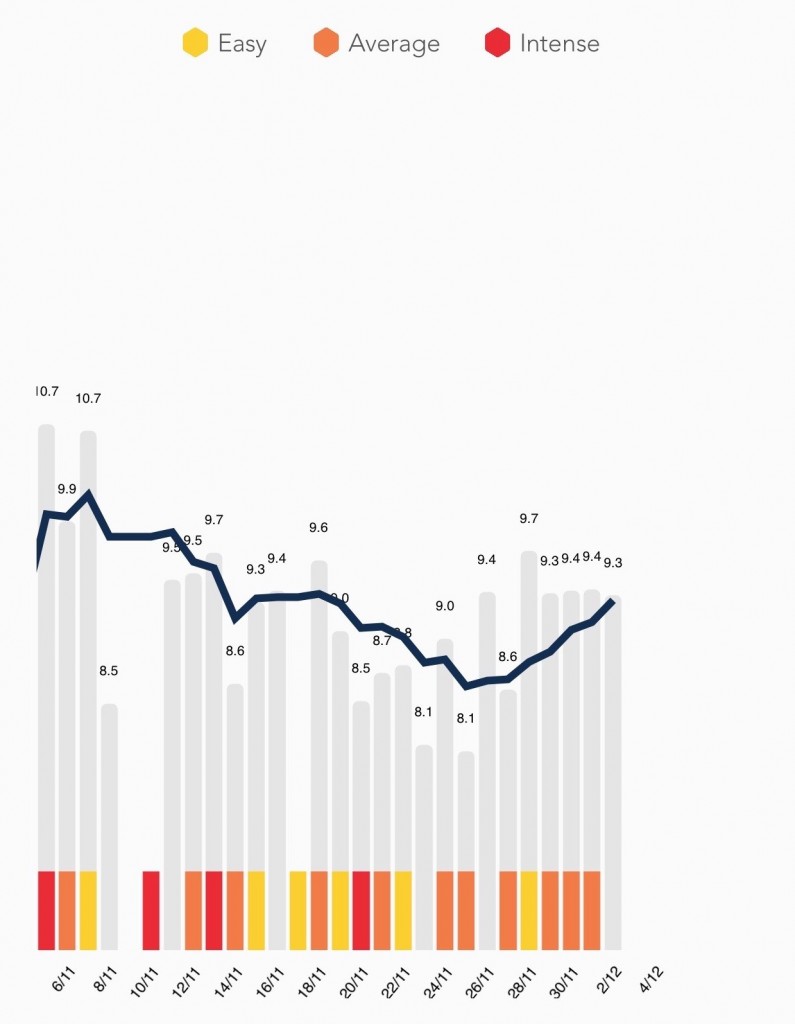 We can see in the first week of the month HR is low, recovery is high to normal and rMSSD is elevated. If just monitoring HR we might say a below avg is either a sign of fitness or a sign of fatigue, difficult to know. Looking at rMSSD (a standard measure of Heart rate variability) an elevation could be a sign of the automated nervous system (ANS) being in a parasympathetic state. An extremely high to low score at the end of the first week could be a sign of poor reading reliability or an unbalanced ANS response to the weeks training/stresses. Unfortunately the athlete then didn’t take readings for the next two days but we know from the training diary they went to a triathlon specific training camp. Week two changes the trends dramatically and is contrast to week one. HR is elevated, rMSSD consistently drops along with recovery points. Anecdotally the athlete is still tired, and sleep is becoming inconsistent and poor in quality and time. Week three continues the same and you can see the rMSSD & recovery points trend lines drop to their lowest. Athlete adds in more rest days, and stops intensive sessions. Once a trend like this is seen over three weeks it’s clear a problem is prevalent and the first port of call we use it to make sleep a priority. Below is a picture of a graph showing the relationship with the athletes sleep quality and rMSSD. 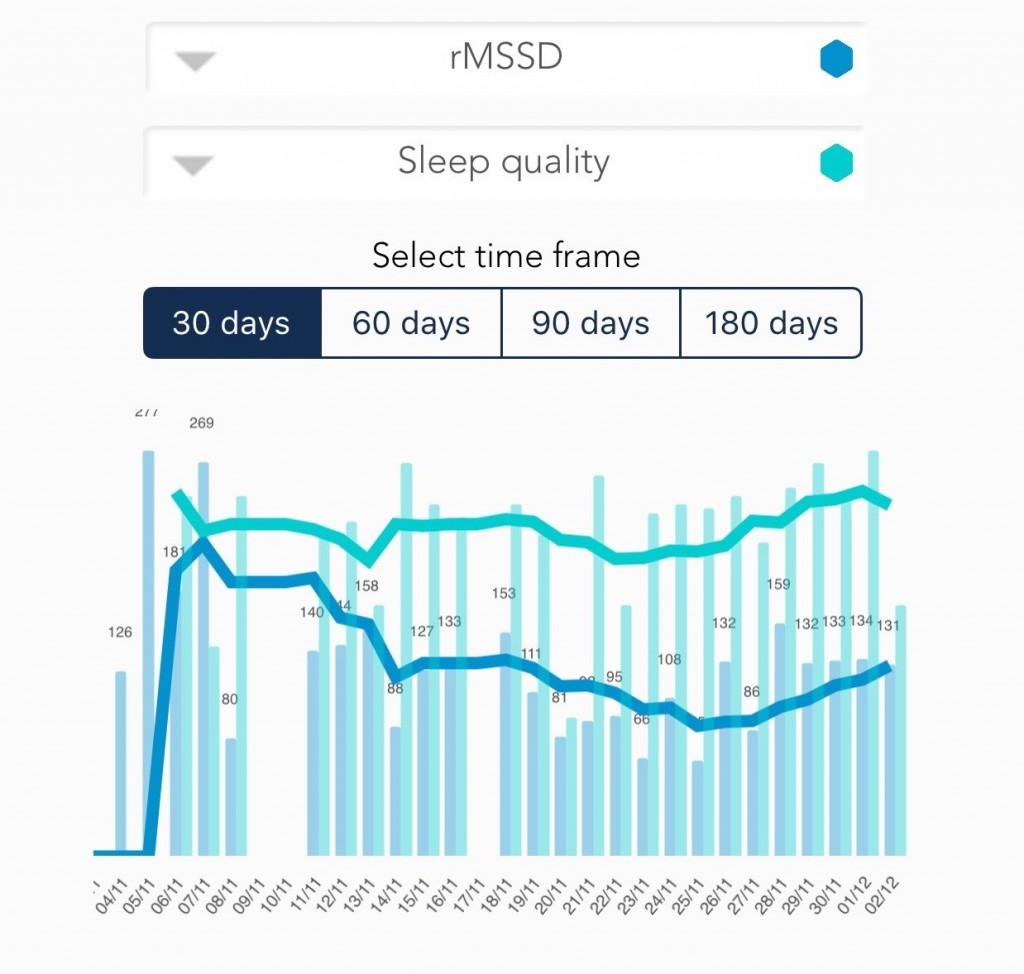 We can see, only a few days of below avg sleep drops the rMSSD consistently. The two trend lines show a weak positive correlation. What is also clear is when sleep is made a priority and intensive training is reduced both lines rise. The next three pictures show a better example of sleeps effect on HRV4Training data. 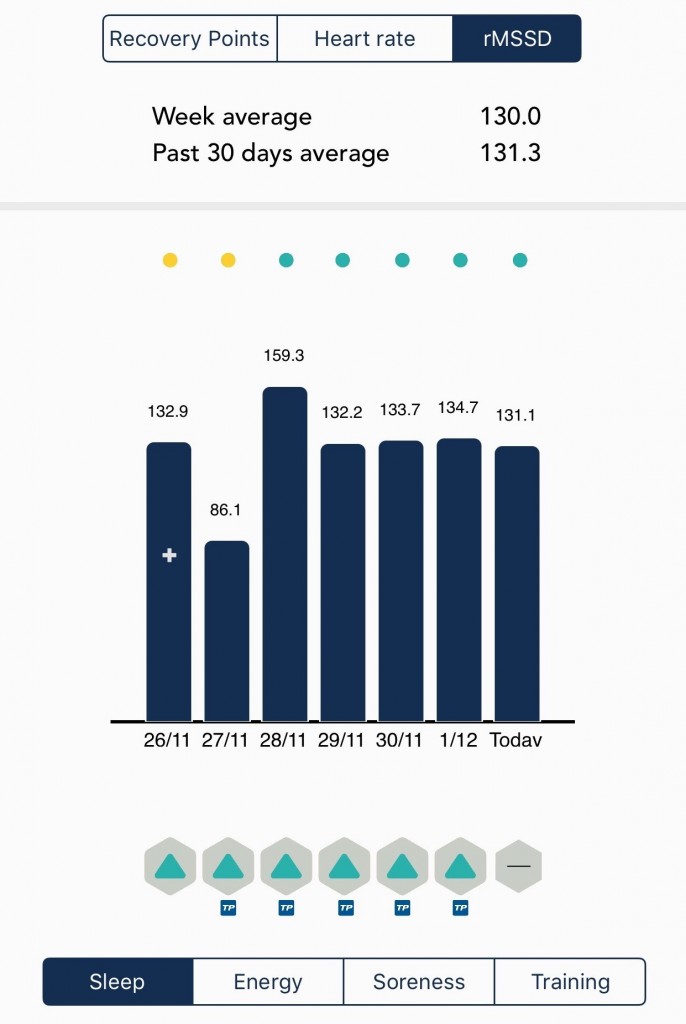 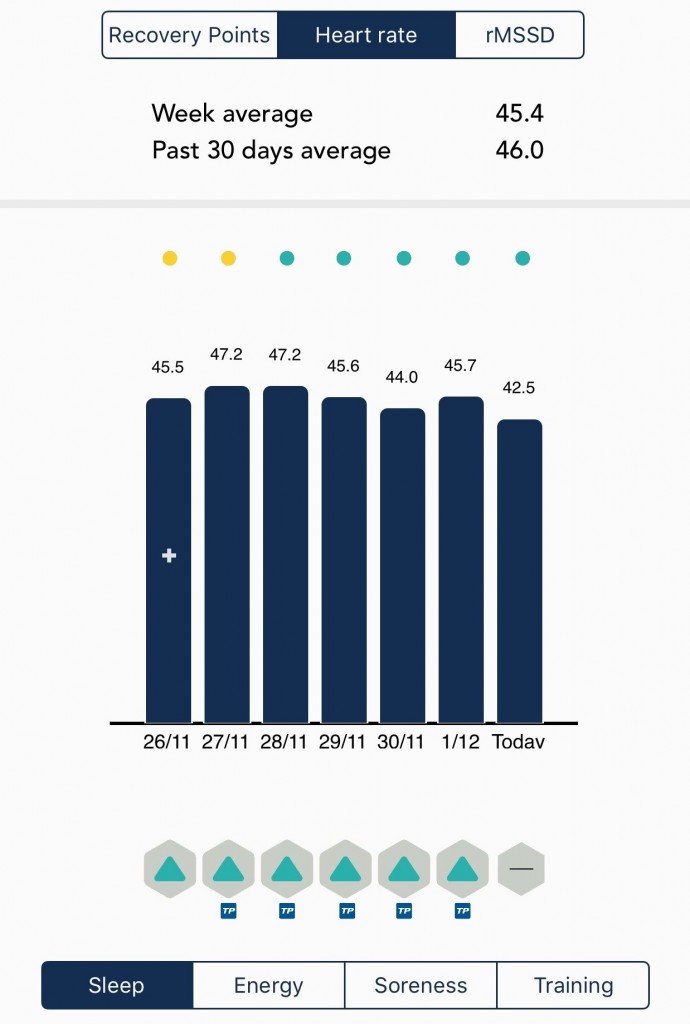 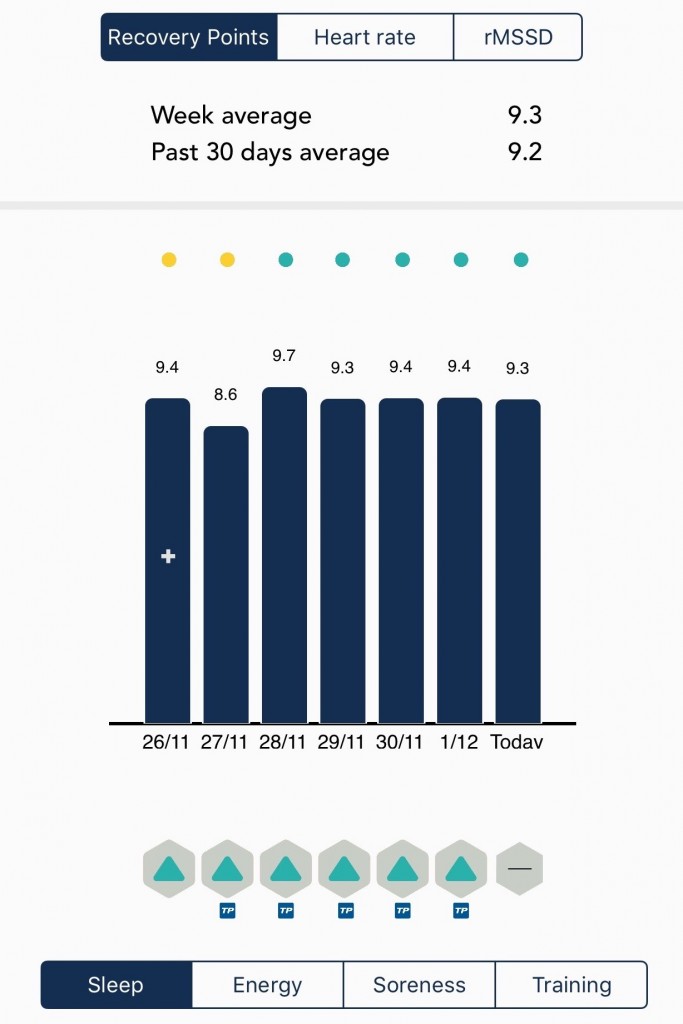 Illness is reported on 26/11, however the athlete should have reported this earlier but athletes rarely like admitting to the fact. Post illness reported day, rMSSD is low, suggesting a ’stressed’ sympathetic state, HR is also elevated agreeing with this and recovery is low. As sleep quality continues to be reported as good (shown by the blue up arrow) you can see rMSSD levels-out and actually shows above monthly baseline, HR starts to drop under and recovery points rise back to and above baseline for the previous 30 days. From this weekly data snap shot we can make an assumption the athlete is ready to get back to training again and is recovered from illness suffered. Anecdotally the athlete felt better for the rest and reported they took short naps in the day to increase total sleep time. Using HRV4Training we can review this trend and hopefully spot the signs of illness coming sooner the next time the athlete reports over tiredness and poor recovery. Without the data, it’s likely the athlete would have resumed training too early and not escaped the under recovered/illness cycle that many athletes get stuck in. Hopefully this has given you an insight into the powerful tool that is HRV4Training, as well as how athletes self reported measures of feeling are not to be ignored and are extremely useful to the coach. At InnerFight Endurance we find a balance of using both, and encourage our athletes to check in with the app everyday. For more info please head to the article and podcast, or email me - tw@innerfight.com.   By: Tom Walker, Endurance Coach