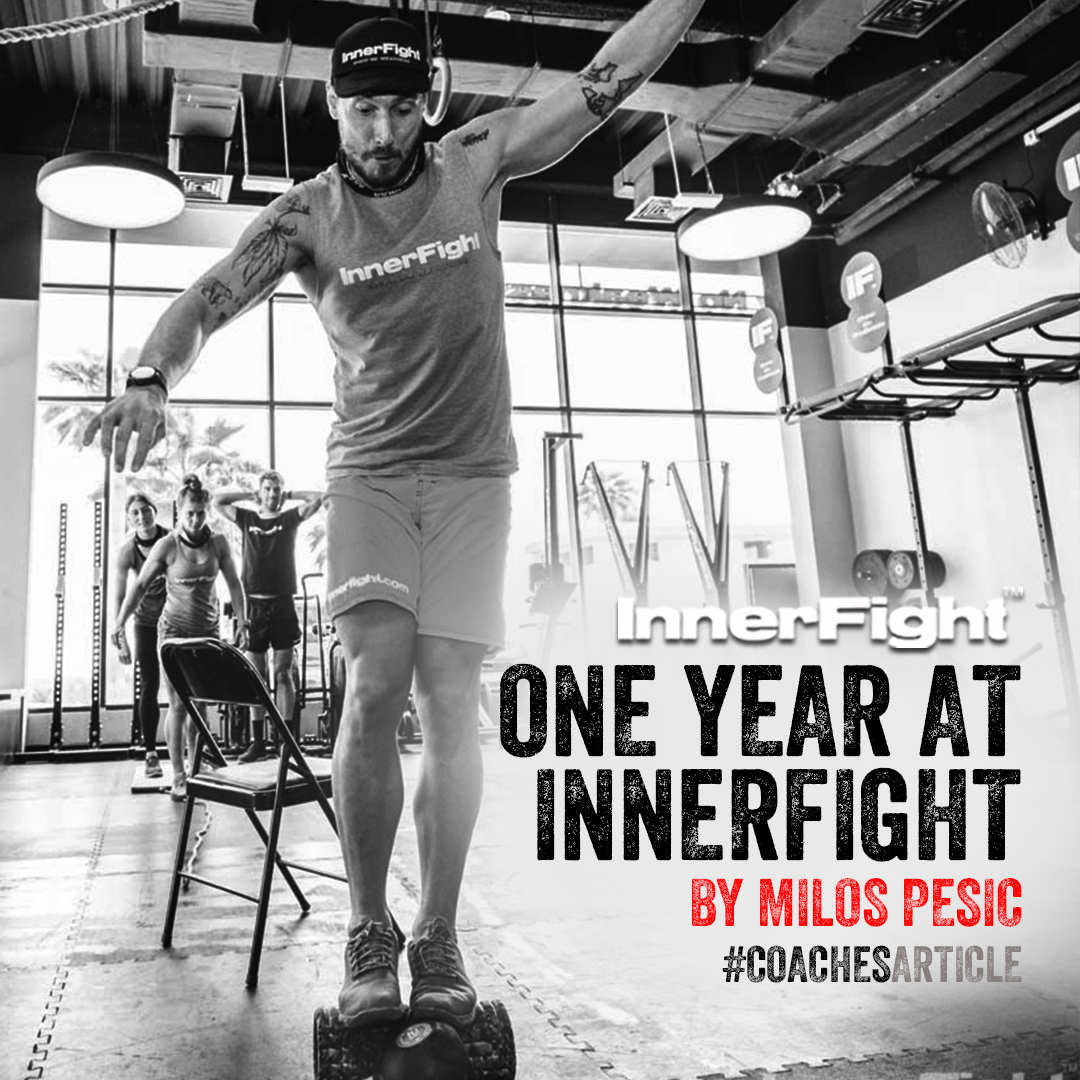 One year since I joined the InnerFight team. What a fantastic year it has been!

Last February, just before I started my journey at InnerFight, I had a message from Marcus to meet him at the gym on Tuesday at 7:30 am. Yes, 7:30 in the morning. I was shocked, as I never had an interview that early mainly as I lived in a country where gym life starts from 2 pm till almost midnight.

I came in front of the gym and took some time to find an available parking spot as it was packed even though it was mid-week. While I was approaching the coffee shop (Smith Street, at the time, was in front of the main door next to the reception), I noticed a group of people and wondered what everyone does there that early. Found Marcus in the crowd and introduced myself as he couldn't recognize me because of my 'slim shady' hairstyle.

While he was showing me the facility, I noticed that even more people were inside the gym doing two different classes, then I realized they were regular members working out. Instantly, I ask him whether it is this busy every morning. His answer shocked me even more: "Yes, that's our third class since we opened at 5:30 am". Basically, couldn't believe that ordinary people would wake up that early to train. But that's the InnerFight community!

The introduction to the gym was smooth, and both sides were on the same page with the same goal of making people better at life. My worry was CTC (coach the coach), even though I had experience managing and coaching coaches from my previous work and writing articles. Yes, the one you are reading at the moment.

With good lead by management and helpful staff, I managed to face the fear and make them enjoyable and valuable tools for my personal growth.

I have had the chance to work with many dedicated athletes, fitness enthusiasts, and ordinary people just trying to live healthier life, by coaching mainline and circuit classes.

One day, I met with a new member looking for rehab sessions, after her knee surgery. I took up the challenge, and my journey with Ida began. We started working on her knee problem, and within three months since her surgery, she managed to do two spartan races. That was when I decided to focus mainly on Personal rehabilitation sessions.

InnerFight Endurances is a world-leading coaching team. This motivated me to start cycling with the group on the weekend and occasionally join Track Tuesday. In less than three months of, let's say, endurance training with 40km total of running in the pocket, I decided to join coaches version 50-50-50 ITD (into the darkness). This was the most challenging thing I had ever done to date; even my 24h Ski erg challenge did not compare with it. With tremendous willpower, stubbornness, luck, and great support from my wife Ivana and former IF coach Alex, I completed the distance, which inspired a few other endurance members to try and finish the total distance for the first time.

As Marcus said, "days like those build us as humans, as a coach and helping our community" I can say I was even prouder of my achievement just being able to push boundaries and inspire others.

A month later, I tested myself in the launch of SNW. A 24hour test of mental and physical resilience. Even though I ended up in the hospital from dehydration, this was one of the best experiences in my life. I learned a lot about myself and the environment I am in. I highly recommend everyone to take on the challenge. SNW is 24 hours that will change your life!

One day I noticed a trophy with Marcus's name on it and numbers of 30x30. With no idea what this was, I started researching. Marcus ran 30 marathons in 30 days. I was impressed and, at the same time, very inspired. It got me thinking daily, what kind of mindset must you have to do this day after day. I decided to challenge myself, 30 days of rowing consecutive marathons because, as you know, running is not my strongest point, and the challenge itself ended up being 32 days of consecutive rowing marathons.

Aside from the physical challenge, I wanted to spread awareness of ovarian, cervix, and breast cancer.

I learned that inspiration is a chain reaction, and we never know when, where and how we might impact and inspire with our achievements.

The numbers above are inspiration numbers from my 32 days of rowing.

First, number 1 was Marcus.
Second, number 1 is myself.
4 people inspired by me did their first rowing marathon ever.
16 is the number of people who rowed half-marathon.
40+ people joined me rowing throughout the 32 days.

After a month of completing the challenge, I had a chance to share my story with the public and did my first public speech at InnerTalks.

The next challenge will remain the same as first, and every other one here on is to "MAKE PEOPLE BETTER AT LIFE."

After a very exciting first year at InnerFight, I am very grateful for being part of an amazing team and cannot wait to see what the next year will bring!