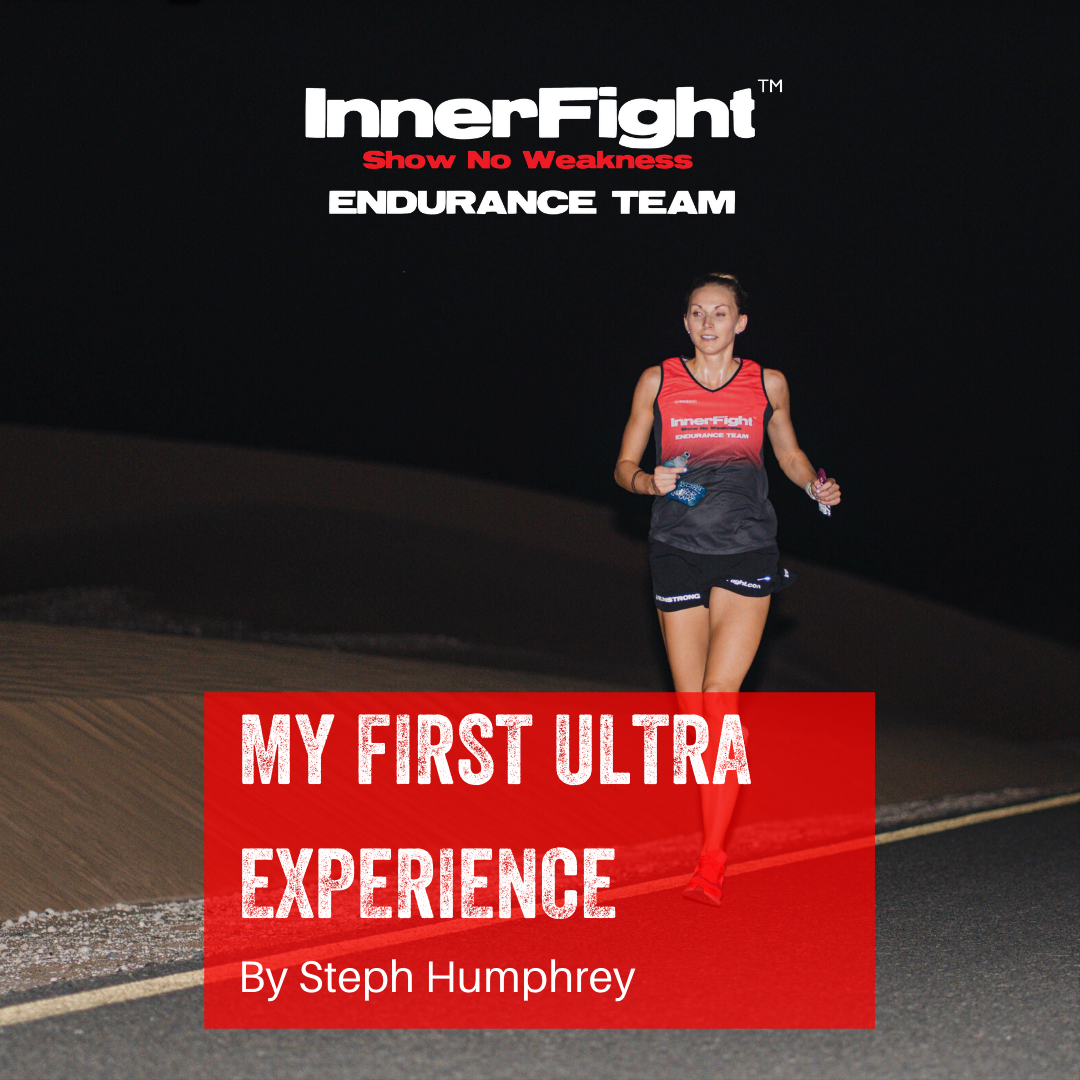 I decided to start writing this article before actually running the distance as I wanted to fairly document the lead up to this 50km, as opposed to viewing my preparation and pre run feelings through post run tinted glasses.

Running a marathon was once on my bucket list. I was 26 and living in London when I secured an entry into the London Marathon. I had watched the race most years growing up, either on TV or on the packed streets of London, and there was just something about it that made me want it. I saw the suffering and the gratitude that it brought to runners, and I figured that is what I was aiming for with my weekend warrior miles. My goal was run sub 3 hours 30mins, and on Sunday 26th April 2015 my social media post was a photo of that medal around my neck and a caption that said “Bucket List: Run a marathon in sub 3hr 30. Check! 3hrs 26. #Neveragain”

I truly meant it, never again! I remember when I crossed the finish line, I did not get that wave of emotion or euphoria that you saw from the sidelines. When I saw my family I said, “I am not sure why I just did that!”. It was painful, and quite frankly, it was lonely. Yes, I had family and friends eagerly cheering me on throughout the 26.2 miles (42.2km), but all my training was done solo, as was my race. I also knew that the marathon training had brought huge structure and discipline to my week (for 4 months), and that structure was now gone. I hadn’t thought past this race, I didn’t have another goal.

The days after the marathon it started to settle in what I had achieved, I was proud of myself. But I was also sick as a dog, my immune system was shot. I lost my voice, was bed bound and diagnosed with laryngitis, tonsillitis, and bronchitis. I had gone from being in what I deemed “the best shape of my life” to texting my housemates asking them to bring me a glass of water.

So, fast forward 6 years, here we are in 2021, and in 2 days I am running 50km. What has changed since the that social media post in 2015? A lot. Firstly, this run is not an “A Goal” of mine. I have just finished a successful race season in Dubai, where my I focused on 10km races, with the main aim to PB over this distance, and finally dip sub 40mins. Throughout the season I PB 4 times and finished the season at 38:43. I learnt a lot, and deep-down feel that if we had a couple more weeks of the winter weather, I would be capable of sub-38.

I concluded my last race at the end of April and every part of me wanted to collapse in a heap and take a couple of weeks off, but this 50km was just 3 weeks away, and 10km training is not quite like 50km training. So, did I feel underprepared? You bet! I swiftly shifted my training to focus on time on feet, not caring about pace nor distance. I just wanted to physically and mentally get accustomed to long runs being long, like actually long. My crash course ultra-training took me to a 30km long run. And quite frankly, it was not fun. I had been enjoying all my running prior to this, but this run was shocking. It was humid, I ran out of water, and I can only describe it as feeling hungover for the next 24 hours. Not quite the confidence boost I was after. I analysed my sleep and nutrition for this run and decided to make some amends for the pending 50km.

Part of me feels silly for not prioritising this distance in my race calendar, but the other part of me feels super relaxed about it. I have never felt so at ease going into an event. I know things can go wrong, and I know I will need to deal with whatever life throws at me when it gets hard out there in the pitch black 50km loop of the Al Qudra desert. But I am excited for the challenge, and I am excited to run for a completion goal, instead of a time goal. I am willing to hustle for as long as I can to not get dropped by the other coaches. Whilst this run could be 1000% times lonelier in reality than the London Marathon, I know that I will not be alone. 6 InnerFight coaches will be on the start line on Thursday night. Each with amazing crew willing to support us throughout the night. Nothing says team better than that.

4 hour and 28 minutes of work, and I am officially in the Ultra Club. Like most runs, I learnt a lot out in Al Qudra on Thursday night. Firstly, this run cemented the belief that I truly do love the sport running. It’s so incredibly simple, but yet precise, calculated and unknown.

I made it to the meeting point in Al Qudra just before the bikes set off for their 50km. The energy was apparent but calm, and this energy remained constant until they came back and it was time to run. There was no fancy start, just Rob Jones ran off and we followed him. I don’t think I even said goodbye to anyone, I just started my watch and followed.

For the first couple of KMs the boys chatted away about the bike, and I started to wonder if they had even noticed I was with them. I also hadn’t really said a word. I still wasn’t nervous about the distance and the pace felt comfortable. I just wondered when people might start to kick. Naturally Rob F was long gone, cruising his way to a sub-4 hour 50km.

From 10km in the rest of us had separated, not fully, as we were all basically running at the same pace but just about 50m apart. It was fine, but I knew I was on my own, there was no one to chat to anymore (or listen to!). I can only describe 10km - 40km as a bit of a blur. It was simple, I was running in Zone 2, I wasn’t stressed, and Jack and I had nailed the restocking of my fuel and hydration. I would give him my empty bottle, tell him what to replace it with, and he’d hand me another along with my next bit of nutrition. He would then then drive 5km further down to do it again.

Every time I saw the car drive off down the track I would think “ok I just need to get there now”. I would occasionally be surprised by other cars or cyclist who would nip by and share some words of encouragement, that was nice. But nothing was as great as the ice-cold sponge from Andrea at approx. 25km. She appeared from nowhere with that!

I knew that from 30km I would be in unknown territory, and I was nervous about “hitting the wall” but I was confident in my current pace. I could occasionally hear Marcus and Rob J bantering away and I kept thinking they were going to sail past me, this was their soil, and they know ultra-life. I noticed that they were stopping at the support cars, as opposed to my tactic of running through. I wondered if I was doing it all wrong, but I also worried that if I stopped, I wouldn’t be able to get going again.

Still plodding along, I made it to the mosque (which I have heard people talk about as a landmark), and then knew I was getting close to the end. This part of the route suddenly felt familiar, which I think mentally made it harder. I remembered running along this part on previous “litter pick-up runs” with InnerFight. I then heard Tom’s voice literally next to me. I was confused, he was on a bike, but seemed happy?! Maybe I was just happy to see a familiar face? We had a bit of a chat, I made a joke about something to do with running a 10km TT to the finish, and he left me to it. I was certainly tired at this point. I closed my eyes a couple of times and felt like I could sleep! I knew it was late, way passed my bedtime! But I need to concentrate to get the end now. The Marathon mark of 42.2 ticked over, it wasn’t celebrated but it was acknowledged. More like a “huh look at that, I just ran a marathon”.

I would say the pain settled in about 5km to go. Quite frankly, I was a bit over it, but I was still driven by the thought of Marcus and Rob giving me sh!t if they caught me in the final stretch.  I hustled on and wanted to vomit for the last 3km. Maybe this was a nutrition issue, maybe it was fitness or stress related, who knows really, but I did not feel good! I made it back to Zads, did a quick 200m around the carpark to ensure my watch said 50.0km, and was surrounded by members of InnerFight clapping and cheering. (Andrea also appeared again with those iced sponges, legend!).

My first word was “ouch”, then I just lay down for a bit on the bench.

All in all, a bizarre experience really. I realised that maybe I hadn’t given my training enough credit prior to this 50km. I have been running consistently week in, week out, for months now, and I have worked up to just under 80km a week. Whilst I might have had a focus on 10kms all season, I was consistent and dedicated to my training. I turned up every day and loved the process. So, I was trained for this 50km, I just didn’t know it.

Was I naive going in? Maybe. But was I reckless, absolutely not.

I was outside of my comfort zone, all thanks to InnerFight. I see my team and the array of clients we have challenge themselves so frequently, and this inspires me. Being part of this community is something that I am grateful for daily.

Ultra you are alright! My true love is still with the shorter faster stuff, but I will be back.