HomeCoaches ArticlesEnduranceIRONMAN 70.3 Bahrain: Race Report
You wouldn’t be a fool to imagine the IRONMAN 70.3 Middle Eastern Championships started with a bang! But you would be wrong. It started with a slow rolling stampede of athletes being shouted at to slow down as they tip toe down a slippery set of steep steps into Bahrain Bay. Ten athletes at a time diving into the bay hoping it’s significantly deeper than it was at the previous days practice swim. Luckily it was. Also luckily, it was a fast day for swimming. Just 21 minutes and change for the fastest guys. The bay is sheltered and had been declared cold enough for a wetsuit legal swim; all this meant swim time PB’s were smashed! For myself, 28mins. That’s two mins faster than I’ve gone before. Dubai based swim coach Rory Buck has a role to play for that, but the conditions can't be overlooked. As the swim came to a close the sun started to play its first part in the day, shining directly into our eyes as we sighted for the exit steps. Back up the slippy steps, legs now on fire as well as the arms and it’s into T1. Wetsuit off, race belt and helmet on all while chanting ‘row 3, row 3’ to myself. Run down row 3, grab the bike and it’s time to ride. Traditionally I leave T1 in a bad mood. Angry at another poor swim and ready to make my usual time up on the bike. This time I left content with my swim and ready to take on the out and back, pancake flat 90km bike route. It didn’t take long for the anger feeling to come back. No matter what race you do, the first 15 - 20 mins will always be a tight knit affair and athletes naturally bunch before finding their rhythm and watts. Unfortunately this race was more like a weekend group ride. I promised myself I would remember numbers and call people out for blatant drafting, unfortunately, I have forgotten them. At 20km a fellow (extremely angry) athlete rode up alongside me and pointed out just how many riders were ’sucking’ my wheel. I turned to see a string of 10 - 15 athletes all in a line enjoying the free speed. Anger levels rose, along with the power numbers, couldn’t shake them off. I hate cheating and drafting is blatant cheating...I do admit it isn’t always easy to stay away from someones wheel but you can gradually drop back or make the effort to get in front and up the road a bit. As the obvious advantage started to kick in riders started to feel fresh enough to start overtaking and I decided to share a few choice words with the ones rolling through making no effort to ride legally. Not a great deal else happened on the bike, the course is fast because it’s flat. The F1 track is a nice mix up but flat tarmac is flat tarmac and I cant say it’s even made it into my top 10 bike routes to ride. The last few km’s circle around Bahrain Bay and the run course, butterflies hit the stomach as you see the first glimpse of the pros hammering down the run route. 40km/h avg on the bike, couldn’t have been more accurate with my race watts and nutrition, so I knew a fast time was on. Patience and trust, a good combo to most things in life but definitely a good one for a run leg of a 70.3. Leaving T2 the support was epic but what was even more epic? My run legs seem to be on and goal pace feels like a walk in the park. I chose to only drink 500ml of fluid on the bike and take the rest of my nutrition on in gel form, this means I feel light and zero discomfort. A huge contrast from how I felt at Europeans a few months back. Due to the lack of fluid, I rely on the Stealth Isotonic gels to keep electrolytes balanced along with energy levels topped up. I take one as soon as I get onto the first 9km loop and settle into my rhythm. The sun is now playing its second part in the day and the feed station process is vital. Grab two ice sponges, stick one down my back, squeeze the other over each leg then store it in the front of my tri suit. Grab two waters, chuck one roughly in the direction of my mouth and the other over my head. All this takes just under 10s. Then grab the sponge from my back and squeeze it over my head, wipe my face with it and chuck it. Just before you see the next feed station take the one out from my front, squeeze what’s left over my head, chuck it. Repeat. 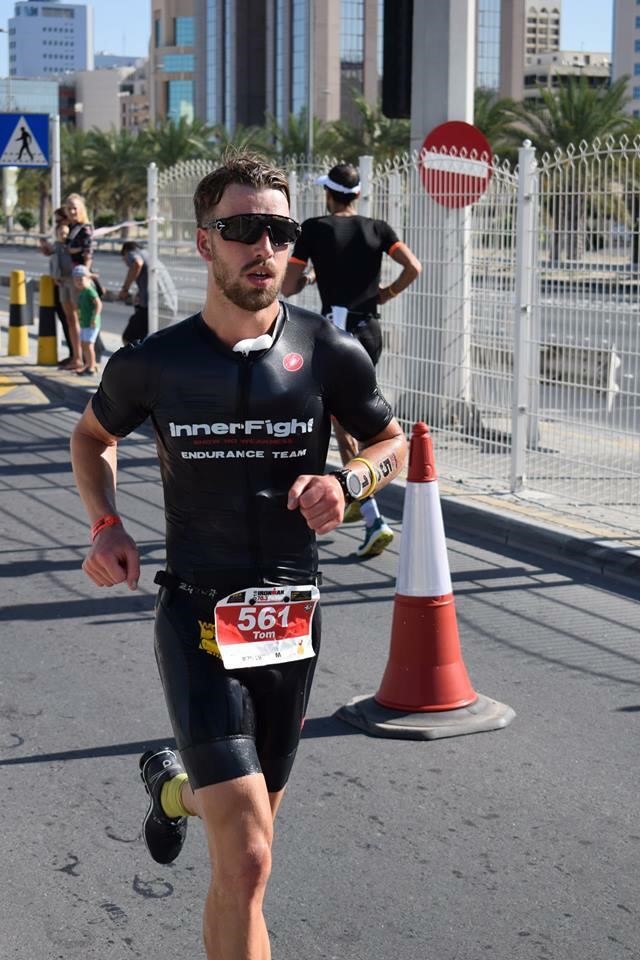 10km done and I’m bang on the money, Flanners is by the side of the road every 9km telling me what I need to know and keeping me patient, an absolute legend for doing so. My coach’s voice is in my head telling me to trust the training and quoting Michael Jordan...15km to go and the run course is getting busy; you need to be a bit sharper at feed stations and shout that bit louder to ensure you get exactly what you want in those 10s of mayhem. 16km to go and a fellow age grouper from Italy enters the fray, I know I’m in 6th and have 2 mins to make up to 5th. He comes past with what feels like ease, I check my watch and I'm slowing, coaches voice now leaves the head and the boss Marcus Smith enters yelling 'murder mode’! I managed to get back up to his shoulder and sit on, the km’s tick by, 4:04, 3:58, 4:04, now it hurts...19km comes and goes, I have one Stealth caffeine gel left to get down. I know it's rocket fuel and down it goes and now it’s really time to dig in. 4:15, Italys gone up the road along with my 6th place, damn...split second later murder mode enters back in my head and I get after it, 4:28, I need more and I’m fully ready to pass out at the finish, 1km to go and it feels like a full sprint. In reality its 4:18 pace and I’m done. Paul Kaye shouts my name as I fold myself over a fence in the finish pen. Still no idea what time I’ve done. I just know I’ve finished, about to pass out, lost 6th place and most likely my slot to WC. Some legend stood me back up in time to see my name on the screen, T. Walker - 4:13:44. I laughed, 4:13:44? That’s a 17 minute PB. That’s Middle Eastern racing! I see Italy over by the drinks table and go thank him for the push, he doesn’t seem happy but I didn’t know why at the time. My race couldn’t have gone smoother (except for the dip towards the end of the run) and couldn’t be more of a contrast to the previous race in Ibiza two months earlier. The biggest win for me was putting that past race to bed and I was so relieved to do so. Some more news came in to make it even better, I was 6th, just. 20 seconds separated me from 7th which happened to be Italy... Digging in always pays off, I didn’t know the time I was on for, I didn’t know only 20 seconds separated me from 7th but I did know the short amount of pain I was in for the last 2 km would end, and those moments are why we race. Last bit of news to top off the day was my AG having 6 slots for the 70.3 World Champs in Nice. This race was fast! The fast boys showed up, making it for a World Record beating day! The top 3 pro men smashed the 70.3 world record. 1st in my AG went sub 4... To put things into perspective, my time last year would have won my AG by 20 minutes. Most of the 22 man strong IFE team grabbed personal bests making it an epic day! A lot of stories came out post race about the drafting, from my experience, that is now part of AG racing. People were getting penalised but not enough. My final thought on it is this. If you draft, you are weak and you are showing all your other competitors you don’t trust your run. I owe a big thanks to everyone who helped me prepare for the race. Wolfi’s bike shop for looking after all things bicycle related, Stealth Secret Training taking care of nutrition, Rory from ICSF & SV for building the engine, Flanners for the prep and race tactics and the InnerFight family and everyone who messaged me for the support. Solid end to 2018!   By: Tom Walker, Endurance Coach