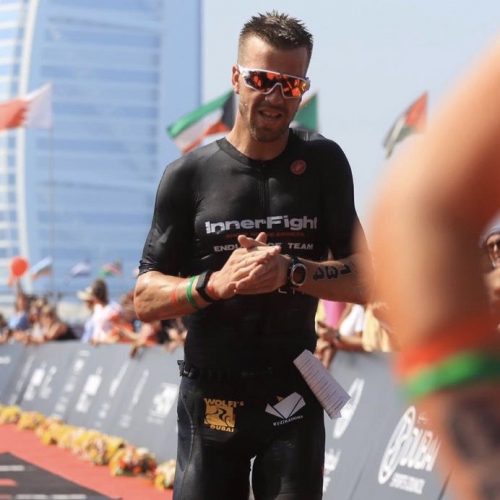 An incredible thing happens when you push the body beyond its limits. It doesn’t care how big your goal is or what it means to you, it only cares about the sensory input it receives and keeping you from doing any more damage. Whether you believe the stopping point happens in the brain or in the muscle, either way it is a stopping point and you will slow down. 10km into the IRONMAN Dubai 70.3 2019 run I experienced the shut down, my pace dropped by almost a minute per km and I had to resign to the fact I had blown. Glasses up, smile on, limp it home…

IM 70.3 Dubai 2020, what a difference a year makes! 10km into the run and I feel comfortable, possibly too comfortable? No, just comfortable and I am waiting for something… that something is in 2.5km and it is my ticket to open the legs up and have fun! The distance arrives and I get to move gears, 15s per km less than I have been sitting it and it feels so good to do it!

Last year I had done the marathon a week before, my legs were tired and even more so, my brain was tired. I had a ‘sort of’ plan for the race but it certainly wasn’t set in stone and it wasn’t really thought through too well. It went like this, if you feel good then go for it, if you don't, then pull back and save the legs for IM SA. These plans can work if you are fresh or if you are racing shorter races but I had looked far beyond the state that my body was in. I had done a very light week of training between the marathon and 70.3, so of course I'm going to be feeling good,  and of course when you feel good you push harder than you should and of course with a 6 day old marathon legs you are going to blow up at some point but you don't know when! I soon found out, it was at the 10km run mark and by then the damage has been done. ‘What was the point in racing if I was going to pull up and coast home anyway’. That was my thought and I was annoyed at myself for racing as if I was fresh and annoyed that I felt I had let a load of home supporters down.

One year on, I actually have more stress, more load and more fatigue in my body than after the marathon last year. Training Peaks is telling me this, coach knows it and I know it so we need a plan. I’ve been on the long distance base build diet for 8 weeks now so I know fitness is there and I know I'm stronger than last year certainly on the bike and swim, so I’m given free reign there and go time trial mode for both. After doing consecutive weeks of 200km rides and 5km swim sets the 70.3 distances don't even touch the sides, it is an awesome feeling to begin the run so fresh. BUT, this is the critical point, my run hasn’t been up to much. I haven’t built the consistency in it yet and I definitely don't have a good tolerance to threshold at the moment which is key for a fast half marathon. All I have is a diesel engine and it needs a warm up, a 12.5km warm up… There is a bit of a joke amongst us IFE coaches around my training, it is based on the fact I do a lot of ‘tempo’ runs. Steady tempo, fast tempo, building tempo… put a word before tempo and I’ve probably done it in the past 8 weeks. The reason for this is I have a big run base thanks to the previous ultras, marathons and Ironmans I have done. Also thanks to this I can get injured on the run pretty fast if I go too intensive too quick so I really struggle to string together ‘speed’ workouts. So the way I’m planning on getting faster is by training a lot at an uncomfortably comfortable pace, which is… ‘tempo’. Hard enough to elicit stress and adaptation but easy enough to recover from quickly and repeat.

The plan is set then, tempo for the first 10k then a 2.5km build and then a threshold finish for the remainder. Sounds easy, but to put it into practice isn’t. Out of T2 you feel great and the crowd is picking you up, so automatically you go faster and always too fast. It takes real concentration to pull yourself back, while you do this your other competitors are soaring, they have the adrenaline surge from the crowd and passing you. Ego must be checked, the plan must be remembered. A few athletes continued to pass me and I continued the inner monologue of my race plan. 5km in an athlete comes past and then 2 mins later pulls up with cramp, a nice reminder to me that the plan is the plan for a reason. At the turn around I get to see who is in front of me and who is behind me, everyone in front gets a nod and I say in my head ‘see you later’, everyone behind I hope they get excited and try to catch me, burn out and blow… I then see the athletes I coach, I say words to them like ‘patience’ ‘settle in’ ‘fine rhythm’, they think I’m coaching them on the course but really I’m talking to myself.. 1hr in and people are hobbling off course and blowing up left right and centre. That was me last year, not this year! At the turn point for my second lap the support is simply amazing, It is also my cue to pick things up and there is no better place to do it. I head back out for my final lap knowing the next time I come through this crowd I will be driving the fun bus!

The bottom line to long course racing is you must plan your race based on what you can do, not on what you hope or wish you could do. An experienced athlete or coach will set their plans out to get the most from themselves or athletes, not to set themselves up for failure. Running your first 5k at 10 - 20s per km quicker than the plan is simply setting yourself up for failure. It is almost a self sabotage. ‘I felt great so I just ran on feel, I knew I was faster than planned but I couldn’t slow down’, this is the most common feedback I get post race from someone who has done a positive run split. Of course you feel great! You are fit and the crowd is right behind you, if you want to run on feel then why are you wearing a $300 gps watch and what do you mean you couldn’t slow down? You managed to at the 1hr mark when you bonked?
‘I felt really in control at the beginning and focused on my fuelling and watching my avg pace sit evenly, I was definitely holding myself back a little’, this is the most common feedback I get when someone nails their run split and usually produces a negative split. The difference is control… they have planned the controllable and are sticking to it. That is the key to race execution for the amateur athlete and the lesson I hope you learn from this article.

Fifteen InnerFight Endurance Athletes went into the race on Friday and all fifteen had a race plan. Three finished their first 70.3 distance 15 - 20 mins faster than predicted. Two both did a course PB and ten all achieved PB’s of which two were by over 60 minutes! The IFE community was out in incredible force and it all made for a very special day. Well done to everyone who raced and thank you to everyone who cheered and supported! #NoWeakness