HomeCoaches ArticlesEnduranceEveresting Jebel Jais
Hill repeat number three had been completed and I was enjoying my reward of incredible scenery and smooth road descending. My Garmin ticked over the 100km mark and it suddenly dawned on me I’d be riding well beyond my distance PB of 180km today. I had another 5 & 3/4 ascents to go, each at 19km a pop, include the descent, that’s 38km up and down. 38 X 5 = 190km, add in this descent and I’m going to hit over 300km. Well, I came here for a lesson. It’s going to be a good one… The Why? Probably the most asked question. I didn’t have a simple answer to this, I just knew it needed to be done. I’ve wanted to Everest a mountain (climb it as many times needed to equal the height of Everest 8,848m) for a long time. I mentioned it to Flanners last month and he didn’t seem to question it so I told the boss I was doing it and he jumped straight on board with the idea. Two weeks later we’re driving to Ras Al Khaimah at 4:30am chatting life through over a coffee. This would be my 4th or 5th ‘challenge’ with Marcus and there’s no-one better in the game to have with you. Nothing is made into a big deal and there is never any 'doubting’ talk or, ‘are you sure’ chat. We both knew I wasn’t getting off the mountain until I'd climbed 8,850m, simple. Back to the question, the Why? Ultimately it came down to two things in my mind: Entering the ‘learning window' We set off at 6:38am, I reckoned it would be roughly 16hrs of riding and about 20hrs in total on the mountain. With the second ‘Why’ in my mind I knew I needed to be patient, with the first ‘why’ in my mind I really knew I had to be patient. Goal number one was to finish, goal number two would take care of itself. As you do more long distance challenges you learn that it takes longer to enter ‘flow state’ where a large portion of lessons are learnt. During Crossing the Wahiba I hit the learning window around seven hours in and dipped in and out throughout the night before the unreal heat and epic sand dunes brought me back to present life. I figured similar timings of this challenge would happen so the first half of the day I knew would be purely about the ride itself. Ascent one Marcus rode with me, showed me up the mountain and I got my first taste of Jebel Jais. It’s a pretty awe inspiring place. You begin at the bottom with high surrounding walls that reminded me of an Indiana Jones film, I was looking out for spy holes and the odd arrow flying my way… (none did). You then go past a random patch of lush green grass, with houses built behind them. It’s a bit out of place but a nice change to the usual stone scenery. As you get about 20 mins into the climb you start seeing the task ahead. I wont lie, I got nervous. The switch backs then begin and the legs start to work, Al Quadra is amazing to cycle at and we are so lucky to have it, but nothing beats a mountain climb…nothing. One hour and 25 mins later we reach the top, one hill rep down. They’ve closed the top top so I rode as close to the road blocking barrier as I could, 999m of ascent…come on…Initially it was thought the top was open which would have put me at 1200m of ascent, that meant seven ascents plus a few more km’s to hit the goal. With the barrier closed it would be 8 & 3/4. It's not like it changed much, either way it would be a long day. The sun hadn’t come up yet so the ride back down was absolutely freezing, it took 25 mins and I was happy to know my brakes were working. The key to these type of challenges is to keep moving so I grabbed a quick bite from the car and immediately headed up on the second hill rep. Marcus brought his run legs and only fancied one climb so he jumped in the car and headed up to the top where we would set up ‘HQ’. 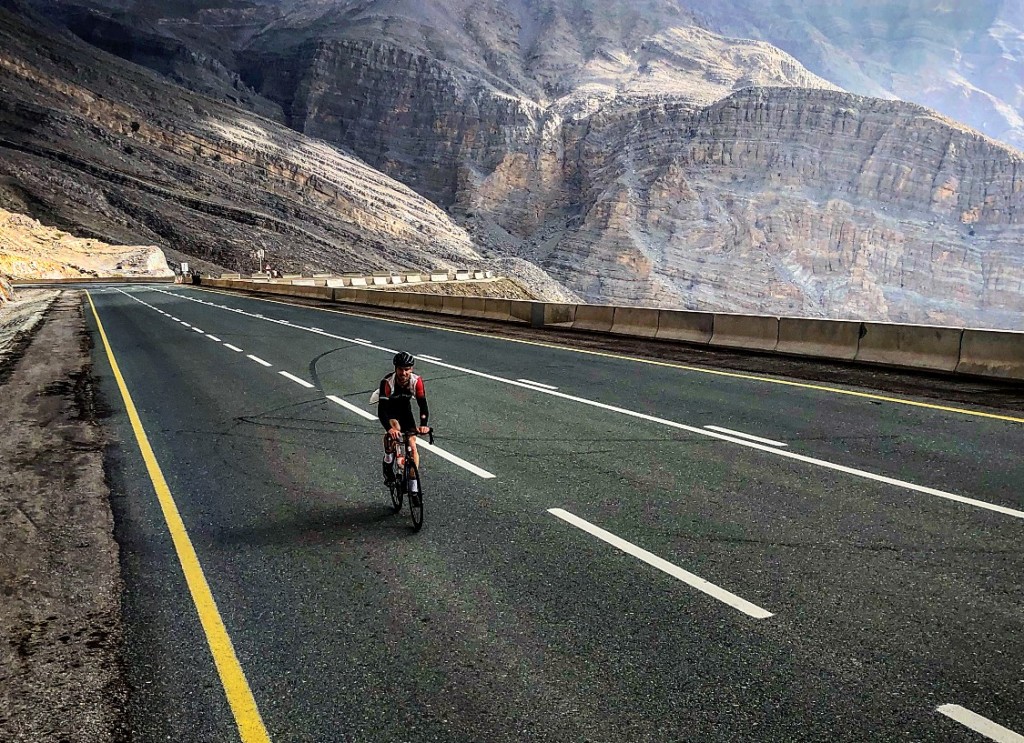 This was it, I was solo from here on in and I couldn’t have been happier. Reps two, three & four were great. Zero problems and almost bang on the same time for each one. Social media was fun and I even answered a few emails and messages while going up, I was flying down the descents and seeing if I could send it over 70kph without filling my bibs (74.9kph was where I drew the line). Hill Rep five began at around 1pm and I’d just had some special MS rocket coffee. Ride time was roughly 7hours and I was over the half way mark, it was the best hill rep of my life. My legs just wouldn’t get tired, flow state on the way? I was hoping so. It didn’t happen, I just kept on riding it and thinking this has to start hurting soon…As I hit the top and started my 10min refueling window Marcus simply said ‘carry on at this pace mate and we’re off the mountain by 9pm!’ That meant we would total 15hrs, ride time would be more like 13hrs. Winning! But I wasn’t learning anything yet, just that I had missed climbing on my bike a lot. Looking back at the data, rep five was my slowest so far that day but felt the best. Caffeine is awesome. I had it in my head I was nailing it, nothing was going to stop me finishing this, I even had Marcus’ bike as a spare in case mine decided to try. Jimi Hendrix went on for the descent, and I flew down ready for rep six. Flow must be on its way soon, surely. As I turned to start rep six a bloke on a mountain bike was heading up a few 100m down the road, I waved and turned and carried on not really in the mood to socialise. I figured he’d be way back anyway on a mountain bike. 20 seconds later he was at my side and chatting away. I genuinely thought he had a motor in his frame, it was awesome. Chris was from Abu Dhabi and a PTI in the army. He was also doing an Everest that day and fancied it on a MTB instead of a road bike for the comfort (and gears I expect). He was a nice bloke and we chatted for 20min or so. I had a point I liked to be at by 30 - 35min. There were two generators pumping water somewhere at the bottom of the cliff and I liked that point because it was about half way in my head and it was where I could start seeing the top and the zip line. As we went past them Chris was still right by my side and chatting away, I wasn’t doing much talking and started to wonder why, was I tired now? Shit, this is starting to feel hard now. My avg power was in normal range and I hadn’t missed a feed. Fatigue was on its way. Chris rode the whole way up with me to the top, I completely zoned out and was probably the worst riding partner he could have asked for (sorry Chris). At the top I got my usual hit of MS enthusiasm and went back down the mountain for rep seven. Everything now started to hurt; neck, arms, back, hips, legs. Come on number seven! It was getting dark now and ride time was coming up to 12 hours. Learning window is coming surely!? Zero events happened for number seven, it was just a normal ride up the mountain. No struggles to get through, no clear thoughts, no flow state. While at the top refueling Chris showed up from earlier just finishing his second. He came over to introduce himself to Marcus and asked how many I had left. ‘He’s got one more then about 800m of ascent after that’, ‘Ah he’s got in the bag then’ Chris said, Marcus responded with ‘He’s had it in the bag since 6am this morning mate’. This is exactly the sort of shit you want to hear before descending down for the penultimate climb of a 15hr ride. One issue I was having since the sun went down was getting cold on the descents, I would sweat buckets on the way up, then be soaked at the top, get cold and then descend. This time I stuck on a head thingy and an extra jacket. Within two mins of heading back down I was shivering uncontrollably, I could barely brake and it felt like my headset had come loose although I couldn’t tell because I couldn’t stop shivering. Half way down I just started to laugh. The hard part of this ride is meant to be going up hill not down! I slowed to a snail pace because it just wasn’t safe any more to go fast and be shaking as much as I was. I got the bottom frozen…Turned to start rep number eight and the tank was empty. This was now it, finally the wall has come. I met the generators at 38 min, three mins behind my slowest climb so far. I was about 20 watts down, anything above it was horrendous. Suffer time had begun…It had taken 13hrs of cycling but I was finally opening the learning window. 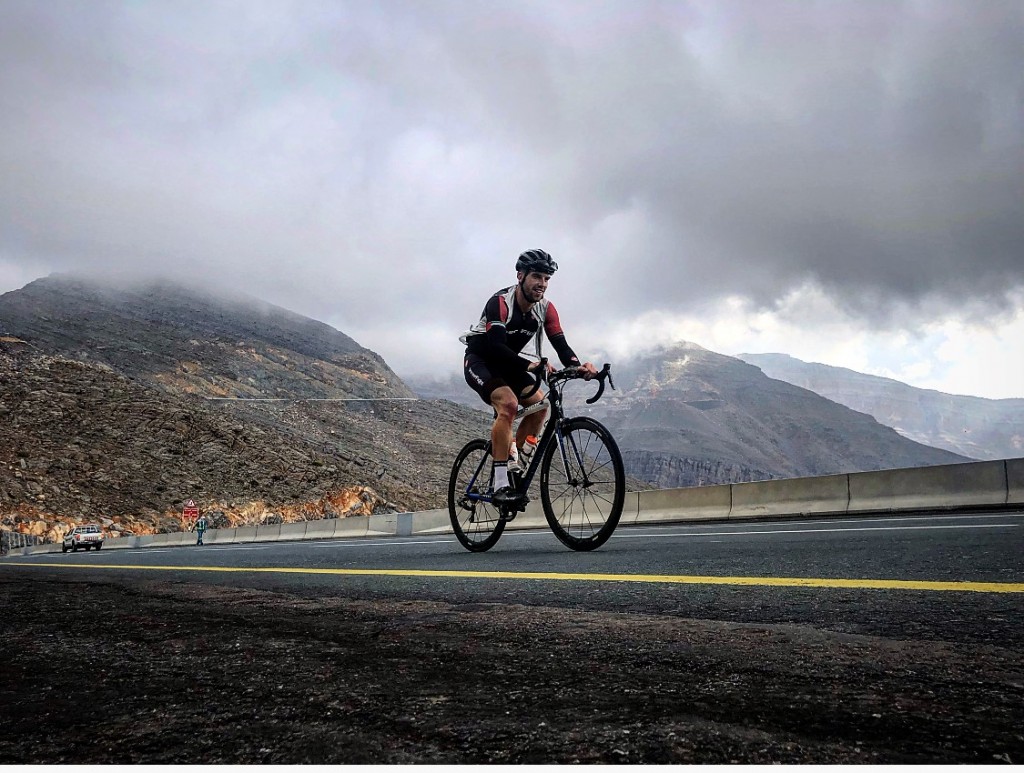 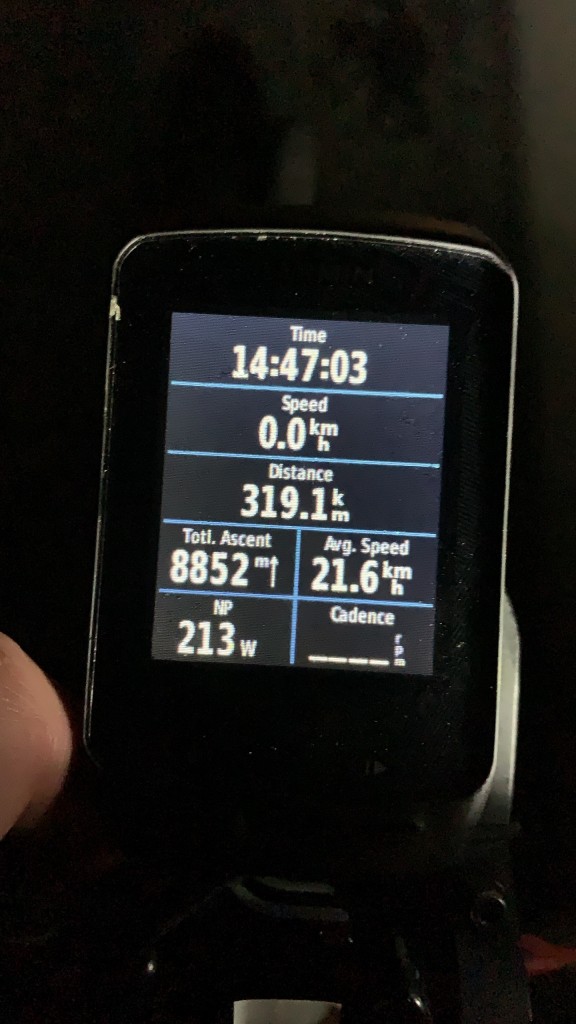