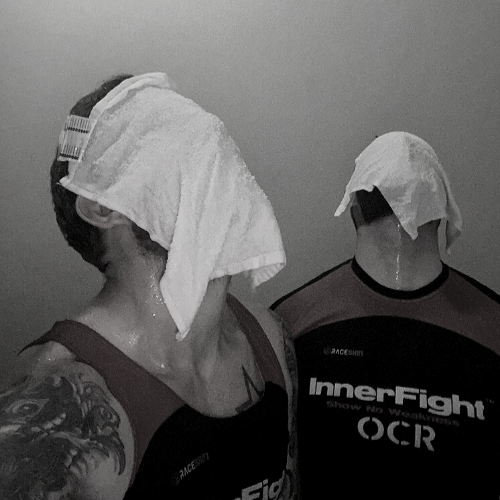 3,000m in and it struck me that this wasn’t going to be as “easy” as I first thought. Each time Pete Goodwin and I ascended the 43-story building the total ascent on my Garmin felt like it just wasn’t moving. It was at this moment that I knew we were in for the long haul and our original goal of completing 8,848m in 12-14 hours was out of the window. We decided to change the plan, not the goal. Everest in a weekend, here we come!

Early on I realised that completing 8,848m in 12-14 hours was not going to be manageable without either passing out or causing myself an injury, so I changed the plan and split the ascent over 2 consecutive days; 4,424m on Friday 17th April and 4,424m on Saturday 18th April. This was a huge relief for my legs which by 4,000m were swollen and crying out for much-needed rest and a bucket load of ice! After 8 hours 15 minutes and 4,424m we stopped, had lunch and put our feet up. At this moment I started to question if I had made the right decision to stop for the day. The thought of going back out onto the staircase the following day to repeatedly look at the same dull grey steps and washed out grey concrete was daunting. After discussing the pros and cons with Pete we agreed it was better to recover smart and be physically and mentally ready to complete another 4,424m the following day.

A welcoming cold shower followed by an ice bucket for my swollen feet made me feel somewhat human again. Pete and I both ordered a large Margarita pizza from Pizza Express and to take our mind of things, played a few hours of ‘Call of Duty’ on the Xbox. For those who know me, I’m not a big gamer, but this was a welcome distraction and helped me take my mind off what was to come, which helped me mentally.

As my alarm went off at 5am, I just wanted to switch it off and roll over back to sleep. I was worried my muscles would be super sore. I heard Pete crashing around in the room next door and thought “shit, I can’t roll over, Pete is awake and getting ready.” I reluctantly got out of bed and to my surprise my legs felt ok. It was GAME ON!

After a light breakfast of buttered toast and coffee we were off again. The first 1,000m of the day seemed to drag a little. My legs felt heavy and stiff, so I decided to ‘single step’ instead of ‘double step’ the stairs like I did on day 1.  This helped ease the legs into the ascent and helped my heart rate stay much lower. I also decided to break the 4,424m up into 4 blocks of 8 to 9 full rounds of the building, approximately 1,100m. After each block I took a short toilet break and refueled with some ‘real food.’ As I completed each block I could feel the joy of seeing my Garmin tick over the final 1 meter.

To keep us motivated during the ascent I had previously researched and collected the elevation of some of the world-famous mountains. As we reached each mountain elevation, we celebrated in the stairwell and posted (when we remembered) a picture of the mountain onto our Instagram feed.  These small wins gave us something to aim for and think about whilst looking down at the next grey step! All the supportive messages that came through on both WhatsApp and Instagram helped us so much, so thank you!

The No Talking Zone

We had just passed 6,500m and Pete had decided to start reading a book from his phone whilst ascending. He was reading ‘Alex Hutchinson – Endure’ (epic book if you haven’t read it). With Pete fully immersed in his book we had entered the ‘no talking zone.’ For me this meant watching and listening to my footsteps on what was now a very familiar grey staircase. There was something strangely calming about the sound of my footsteps amidst the silence of the stairwell that helped me completely zone out. I had put my headphones in my Kitbrix bag and planned to listen to podcasts, books and music, however I realised that my footsteps were enough to keep me entertained and focused. This, and continuously wiping the sweat from my head with a flannel I carried around my neck. Pete and I knew that we didn’t need to talk, we both just wanted to get the job done. It helped we were both on the same page!

Most things I have read or watched have said life over 8,000m is the worst part. You’ll often hear words like “the death zone” and “no oxygen” used when watching any mountaineering documentary. For us it was a little different. Once our Garmin’s clicked over 8,000m the feeling was incredible! There was no “death zone” chat, but instead a rush of adrenaline to reach the summit.  We had just taken our final break and with under 848m to go we were fueled and buzzing with energy. The ongoing support from the InnerFight OCR WhatsApp group and Instagram messages as we neared the summit was also incredible and added to the overall excitement to reach our goal.

After spending over 18 hours on a staircase it is understandable that we wanted to get out and get back to ‘normal’ life again. We were down to our last 3 ascents of the building and our pace just naturally picked up. We had reverted back to the “double step” technique like we did on day 1 as we knew we didn’t need any energy left in the tank after these next 3 rounds and then BOOM it happened, 8,847…..8,848! What an incredible feeling.

8,848m of total vertical ascent on a staircase. That was a fun ride!

Let’s get real. We didn’t climb Mount Everest or any of the other mountains I posted on my Instagram. We didn’t have to wrap up in lots of warm clothing, sleep in uncomfortable beds and get frostbite on our toes. But what we did do was make the most of what we had, create excitement about the task ahead and support and motivate each other to achieve what we set out to do. We set a goal and made it happen and now, going back to the normal life, which is currently LOCKDOWN, things feel a hell of a lot better.

A few things I can take away from this experience are:

I hope you enjoyed reading,