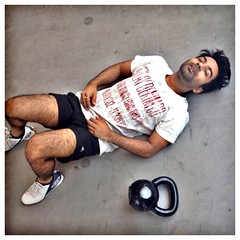 Getting out of your comfort zone, challenging the status quo, feeling better, performing better, generally just smashing life and dominating in everything you do. Yeah that's is what life is all about. And with that thought in mind we embark on another challenge and life transformation with this guy called "Dipp"! He may not know it quite yet or even believe it but over the next 3 months things for Dipp are going to change. He has a new friend in his coach Phil. Phil is going to primarily teach Dipp everything he needs to know to make his body function optimally but more importantly take Dipp totally out of his comfort zone to boost his performance in life! Follow Dipp's week by week updates right here. Being a radio DJ we are sure it will be mixed with plenty of humor but we also expect to see some interesting sides to Dipp that maybe no one knew about until now. Background Name: Dipp Bhargava Nationality: Indian Day job: Radio Presenter and Digital media consultant Current fitness: I am good at exercising but usually its mental exercises. What do you do for fun: Go out, Play PS, Read and work. On a scale of 1-10 how much do you like hitting snooze in the morning: 20 Are you nervous: Hell yea. Nervous and excited. [hr style="1" margin="40px 0px 40px 0px"]

*with 5 burpees at the start of every minute This took close to 23 minutes (including a couple of bathroom breaks) But agin it was great perseverance to carry on a finish the workout. Dipp also attended some of the group classes this week and managed to cope with his second wall ball experience a lot better. The second session this week was a bit of a turning point for Dipp. In previous sessions he often shouted out that he wanted the workout to stop or asked if he could take more rest. Today he finished his workout and said he was happy to finish under a target time he set himself. Check out the workout below: 5 rounds for time: 7 cal row 14 kb swings Just 4 weeks in (about 8 hours of personal training) and Dipp is already coping with group classes just fine. Next week it is time to re-test the baseline! What Dipp had to say about the week: 3 is my lucky number and it clearly showed in my progress as well. Thanks to Phil now warm ups doesn't tire me down! Physically we have a long way to go but mentally I think I'm almost there. At least mentally I'm showing no weakness. [hr style="1" margin="40px 0px 40px 0px"] Week 2/3-

Comments from Phil This week we upped the volume on Dipps strength work. As he only weights just short of 60kg, we thought it was important to increase his over all strength more than anything else. Over the 2 sessions per week we covered deadlifts, bench press and push press. A typical set would be 5-8 reps, for 4-6 sets at a relatively heavy weight. Dipp managed to lift with exceptionally good technique throughout these lifts. After just 3 weeks of training he is already lifting 20% more than his first attempts. What Dipp had to say about the week: At least I was mentally ready in week 2 but physically there was a long way to go. Thanks to Phil he was patient yet persistent and by the end of week 2 I could feel something is changing in me.   [hr style="1" margin="40px 0px 40px 0px"] Week 1: 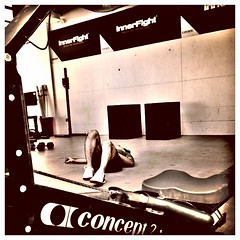 This was what state Dipps body was in when he walked in. Click here to see his full body analysis. In summary he weighs 52.3kg, has 23.2kg muscle and 10.8kg fat. This equates to 20.6% of his body being fat, this is what we have to clear out whilst focusing on a) Maintaining the muscle he has and b) Making that muscle stronger! Training: Comments from Phil We started with basic exposure to compound strength movements. Back Squat 5 sets of 5 reps Baseline test: 500m row 40 squats 30 push ups 20 sit ups 10 burpees Time - 10:43 To say that Dipp struggled is probably a bit if an understatement. The high volume and fast repetitions were a bit of a shock to the system, however he persevered and managed to get through the test. I'm positive that in a few weeks time he will smash this score when we re-test! What Dipp had to say about the week: Ok jokingly I must have told Phil that I have very realistic expectations that I want to be like him in 2-3 weeks but deep down I knew I don't have that much stamina. First week was tough as even the warm up used to tire me down. [hr style="1" margin="40px 0px 40px 0px"]