HomeNewsAll you need to know about the Tour de France 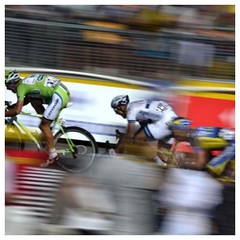 On Saturday, 5th July, one of the biggest sporting shows on earth, the Tour De France, gets underway. For only the 2nd time in tour history it actually starts in Yorkshire, England

Earlier this week, I posted some basic information about who wears what colour and why. This week, here’s a quick guide to some of the Tour’s more significant jargon, in my A – Z guide:

Autobus – Also known simply as ‘the bus’, this is the group of riders at the back of the race in the mountain stages. The bus mostly consists of sprinters and other non-climbers, and the aim is simply to finish within the day’s time limit.

Breakaway – A rider or group of riders who have a lead over the main bunch during a stage.

Bonking – A rider who has completely run out of glycogen, the carbohydrate that fuels the muscles, is said to have bonked.

Bunch sprint – The mass dash for the line at the end of a stage when the whole race is still together. Despite the name, a bunch sprint isn’t contested by the whole field – the riders at the front are the specialist sprinters and their lead-out men.

Cadence – The rate in revolutions per minute at which the rider turns the pedals. Cadence is a matter of preference, comfort, efficiency and, to a certain extent, fashion.

Classic – The one-day races at the beginning and end of the season, such as Paris-Roubaix and Giro Di Lombardia.

Contre-la-montre – A time trial, AKA race of truth or race against the clock.

Directeur sportif – The term more or less translates as ‘team director’, but the directeur sportif’s role includes management tasks such as selecting which of a team’s riders will ride a particular race; directing the day-to-day and hour-to-hour tactics and strategy on the road; ensuring the riders get the coaching and other physiological help they need and so on. In short, the DS takes care of all the team’s sporting activities, while a general manager looks after issues such as sponsorship and salaries.

Domestique – Domestiques are the worker bees of a team, responsible for looking after the team leader and the other stars. Domestiques ferry food and water to their team leaders, provide a wheel for the leader to follow and in extreme cases even surrender their bikes if the leader has a mechanical problem.

Grand Tour – The highest category of stage race recognised by the UCI. There are three Grands Tours: the Tour de France, Spain’s Vuelta a Espanaand Italy’s Giro d’Italia. Each one lasts for three weeks. The Tour was the first and is generally regarded as the most important, but a win at the Vuelta or the Giro is still a major honour.

Lanterne rouge – The last rider on GC. The term means ‘red light’. There’s no dishonour in being the lanterne rouge. Merely to reach the standard as a pro cyclist where you are selected to start the Tour is a substantial achievement, and to finish it, even dead flat last, is no trivial feat.

Lead-out man – A rider who specialises in providing a wheel for a sprinter to follow in the final stages of a race. Nestled in the lead-out man’s slipstream, the sprinter waits for the final possible moment, then accelerates for the line as the lead-out man pulls to one side. Pairings of sprinter and lead-out man often travel together from team to team, but not always.

Parcours – Simply meaning the race route; the literal translation from French is “course”.

Peloton – This French word simply means ‘group’. It’s also perhaps the most frequently misspelled piece of cycling jargon there is. ‘Peleton’ is not an alternative English spelling of the word, it’s simply a flag that the writer is missing a clue.

Piano – Riding at a gentle pace, as in the less rushed parts of a stage. Often used as a gentle admonition to a rider who is going hard for no good reason – “Eh… piano!”

Radio Tour – The broadcast station that keeps the whole Tour caravan and spectators informed of what’s happening out on the road in the Tour de France.

Rouleur – A rider who specialises in steady, consistent riding. Rouleurs are often ‘super-domestiques’ able to provide a wheel for the team leader for hours at a time.

Slipstream – The still air behind a rider. At racing speeds most of a rider’s effort goes into overcoming air resistance, and it’s therefore significantly easier to ride in the slipstream of another rider than to break the air yourself.

Soigneur – A member of team staff who looks after the riders, performing duties such as giving massages, handing up food and water bottles, seeing that riders get to their hotels and so on.

Sprinter – A rider who is capable of accelerating very quickly at the end of a race. Sprinters are born, not made: you need a high proportion of ‘fast-twitch’ muscle and steely nerve to go shoulder-to-shoulder with a dozen similarly gifted riders at 70km/h.

Stage race – A multi-day race such as the Tour, in which each section of racing is a smaller race in itself. Stage races usually have just one stage per day, though ‘split stages’ comprising, say, a short road race stage in the morning and a time trial in the afternoon, are common in less important stage races.

Team leader – The team’s best rider, for whom the rest of the team is working to achieve a goal like the overall victory, or the points jersey.

Tempo – ‘Riding tempo’ means setting the pace for the peloton or for another rider, usually at a high but not excessive level.

Time bonus – Time bonuses are awarded in some stages for the top finish positions, and for intermediate ‘bonification’ sprints in stages. Time bonuses are generally only on offer in the first week of the Tour and the idea is to generate some more exciting racing, giving the sprinters a chance of wearing the yellow jersey even if they are a few seconds behind after the prologue.

Time limit – Riders in each day’s stage must finish with a certain percentage of the winner’s time or they are eliminated from the race and not allowed to start the next day. The exact percentage varies according to the type of stage, the terrain and the speed. For a fast, flat stage it can be as low as five percent, while for a slow, mountain stage it can be 16 or 17 percent. In certain circumstances the race organisers have discretion not to eliminate riders, for example if doing so would eliminate a very large part of the field.

Time trial – A race against the clock, either solo or in teams. Known as the ‘race of truth’ the time trial is the most powerful test of a riders’ ability simply to ride as hard and fast as possible.

Ladies and gentlemen – it’s going to be epic!